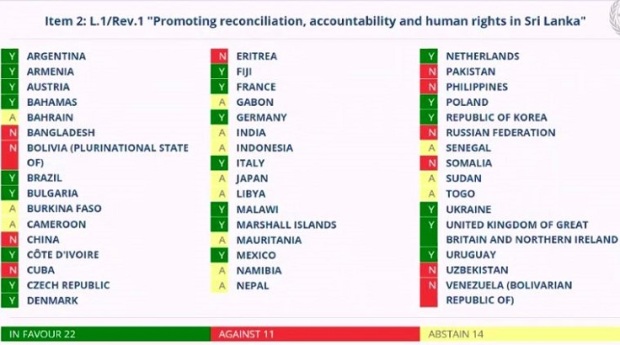 COLOMBO– Sri Lanka lost a vote at the United Nations Human Rights Council (UNHRC) on Tuesday (23) as the 47 members voted 22 to 11 to impose a resolution that will empower the UN to collect and store information that could lead to international criminal proceedings.

Fourteen members of the council, including India, Nepal and Japan abstained while China, Pakistan and Bangladesh supported Sri Lanka. The Resolution was introduced by the United Kingdom and among the proponents were Canada and the European Union states.

Foreign Minister Dinesh Gunawardena told reporters shortly after the vote that the session had been a “victory for Sri Lanka because 14 members had abstained so only 22 out of the 47 members supported the resolution.”

The resolution does not impose any sanctions on Sri Lanka as a country. The concrete result of the vote is that the UN will create an office with an annual budget of US$ 2.8 million to collect information about war crimes and crimes against humanity committed in the country.

The Executive Director of the Centre for Policy Alternatives, Dr. Paikiasothy Saravanamuttu said the loss was a “foreign policy fiasco when you consider those who voted in support of Sri Lanka.”

In a statement made shortly before the vote was taken, Sri Lanka’s Ambassador to the UN C. A. Chandraprema said the scope of the resolution violates the United Nations Charter and accused the proponents of the resolution of politicizing the issues.

China, which also supported Sri Lanka, said there was “interference in the internal affairs of Sri Lanka” in the Council proposing the resolution and urged members to oppose it.

The Philippines, which was roundly criticized by a number of Human Rights organizations for alleged extra-judicial killings, supported Sri Lanka calling for dialogue rather than a hostile resolution.

But the 22 ‘yes’ votes was what most observers had predicted would happen on the eve of the vote. The supporters of the resolution had hoped for a few

The Sri Lankan government conducted a flurry of diplomatic moves over the past few weeks with Prime Minister Mahinda Rajapaksa visiting Bangladesh and President Gotabaya Rajapaksa making phone calls to the Secretary-General of the Organization of Islamic Cooperation (OIC) to get Muslim countries to support it.

Proposing the resolution to the Council the High Commissioner for Human Rights Michelle Bachelet pointed out that 12 years after the separatist war ended “domestic initiatives have repeatedly failed to ensure justice for victims and promote reconciliation. Despite commitments made in 2015, the current government, like its predecessor, has failed to pursue genuine truth-seeking or accountability processes,” she said.

Earlier Bachelet had released a damning report on Sri Lanka accusing the armed forces and the LTTE of grave Human Rights violations.

She said the “impact on thousands of survivors, from all communities, is devastating. Moreover, the systems, structures, policies and personnel that gave rise to such grave violations in the past remain – and have recently been reinforced.”

In her report, the High Commissioner had noted that the space for civil society and independent media, which had grown significantly, is now rapidly shrinking in Sri Lanka.

“The independence of the judiciary, the Human Rights Commission of Sri Lanka, the National Police Commission and other key bodies has been deeply eroded by the recently adopted 20th Constitutional Amendment,” she said.

“The growing militarization of key civilian functions is encroaching on democratic governance. The continued failure to implement comprehensive reforms – or to vet personnel – leaves in place security and military officers who have been implicated in alleged grave crimes and violations,” she said.

The government had continued with its policy of forced cremations of the remains of all COVID-19 dead, despite serious objections raised by the Muslim and some Christian communities. It also disregarded recommendations by a panel of experts appointed by the Health Ministry that burial, which is the preferred method for these religious groups, could be allowed.

However, when seeking the votes of the Muslim countries in , the government reversed the policy and the OIC allowed its members to vote for Sri Lanka.

“By repeatedly failing to advance accountability for past human rights violations committed, and by withdrawing its support for the Council’s resolution 30/1 and related measures, the government has largely closed the door on the possibility of genuine progress to end impunity through a national process,” she added.

Sri Lanka regulator withdraws approval for emergency use of Sinopharma