1930 – At the end of the Salt March, Gandhi raises a lump of mud and salt and declares, "With this, I am shaking the foundations of the British Empire” 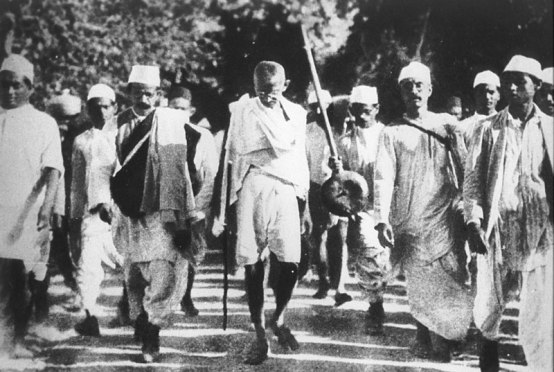 The Salt March, also known as the Salt Satyagraha, was a 24-day nonviolent civil disobedience act in colonial India against the British salt monopoly.  Led by Mahatma Gandhi, the March began on March 12, 1930 , with 78 of his trusted volunteers and spanned 240 miles (390 km), from Sabarmati Ashram to Dandi, which was called Navsari at that time (now in the state of Gujarat).  Growing numbers of Indians joined the march along the way. When Gandhi broke the British Raj salt laws at 6:30 a.m. on this day in 1930, it sparked large scale acts of civil disobedience against the salt laws by millions of Indians.  The Salt Satyagraha campaign was based upon Gandhi’s principles of non-violent protest called satyagraha, which he loosely translated as “truth-force”. Gandhi chose the 1882 British Salt Act as the first target of satyagraha. The Salt March to Dandi, and the beating by British police of hundreds of nonviolent protesters in Dharasana, which received worldwide news coverage, demonstrated the effective use of civil disobedience as a technique for fighting social and political injustice.