1938 – Oil is discovered in Saudi Arabia 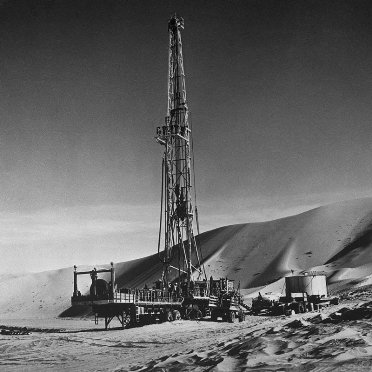 In 1933, Standard Oil of California (SoCal) was awarded an oil concession for the province of Al-Hasa in Saudi Arabia. Exploration commenced in the autumn but, as its geologists surveyed the terrain by motor car and aeroplane, the amount of information they could obtain about the geological substructure was limited.  SoCal  then set up a subsidiary company, the California Arabian Standard Oil Company (CASOC) to develop the oil concession.

When CASOC geologists surveyed the concession area, they identified a promising site and named it Dammam No. 7, after a nearby village. Over the next three years, the drillers were unsuccessful in making a commercial strike, but chief geologist Max Steineke persevered. He urged the team to drill deeper, even when Dammam No. 7 was plagued by cave-ins, stuck drill bits and other problems, before the drillers finally struck oil on this days in 1938. This discovery would turn out to be first of many, eventually revealing the largest source of crude oil in the world. For the king, oil revenues became a crucial source of wealth since he no longer had to rely on receipts from pilgrimages to Mecca. This discovery would alter Middle Eastern political relations forever.