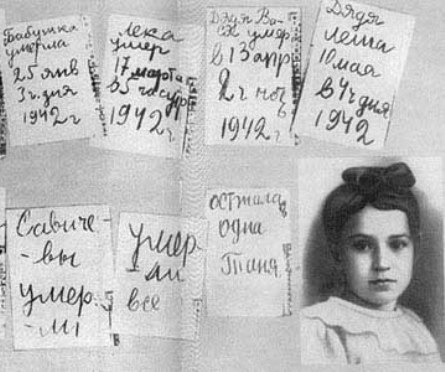 The siege of Leningrad was a prolonged military blockade undertaken from the south by the Army Group North of Nazi Germany against the Soviet city of Leningrad (now Saint Petersburg) on the Eastern Front in World War II. The siege began on September 8, 1941, when the Wehrmacht severed the last road to the city. Although Soviet forces managed to open a narrow land corridor to the city on January 18, 1943, the Red Army did not lift the siege until this day in 1944, 872 days after it began. The blockade became one of the longest and most destructive sieges in history, and it was possibly the costliest siege in history due to the number of casualties which were suffered during it. In the 21st century some historians have classified it as a genocide due to the systematic starvation and intentional destruction of the city’s civilian

Photo Caption – The diary of Tanya Savicheva, a girl of 11, her notes about starvation and deaths of her sister, then grandmother, then brother, then uncle, then another uncle, then mother. The last three notes say “Savichevs died”, “Everyone died” and “Only Tanya is left.” She died of progressive dystrophy shortly after the siege. Her diary was used by the prosecution at the Nuremberg trials – Wikipedia

Solidarity is failing: EU and UK fight over scarce vaccines