UNHRC resolution: A ray of hope for Sri Lanka 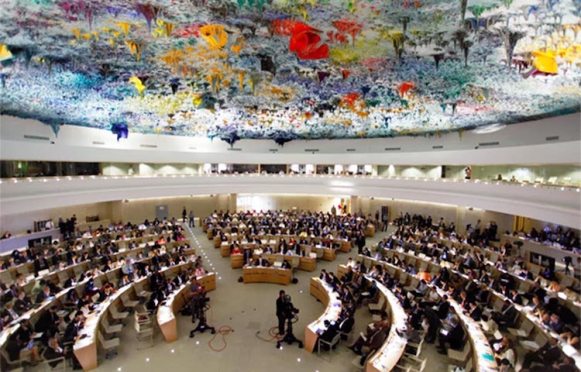 The UN Human Rights Council (UNHRC) resolution ‘Promoting reconciliation, accountability and human rights in Sri Lanka’ was adopted with 22 members of the Council voting in favour of the resolution, 11 members voting against it and 14 members abstaining. The passing of the resolution marks the strongest action ever taken by the UNHRC regarding the human rights violations by Sri Lanka, calling for an extensive series of actions for correcting past wrongs. It also recognises the deteriorating human rights situation in Sri Lanka over the past year, which has warning signs for the future, including accelerating the militarization of civilian government functions, the erosion of the independence of the judiciary and key institutions responsible for the promotion and the protection of human rights and ongoing impunity and political obstruction of accountability for crimes and human rights violations in emblematic cases.

The resolution entrusts the Office of the High Commissioner for Human Rights (OHCHR) to collect and preserve evidence on serious human rights violations and lays down reporting timelines.

The resolution “Requests the Office of the High Commissioner to enhance its monitoring and reporting on the situation of human rights, including on progress in reconciliation and accountability, and to present an oral update to the HRC at its 48th session, as well as a written update at its 49th session and a comprehensive report that includes further options for advancing accountability at its 51st session, both to be discussed in the context of an interactive dialogue.”

An allocation of $2.8 billion was also assigned for the implementation of the resolution.

The resolution is based on a strategy aimed at preventing grave human rights violations. For many years Sri Lanka has successfully evaded taking responsibility for dealing with the violations that have been committed in the country. The present government took up the position of opposing virtually any collaborative efforts in dealing with these problems. Thus, this new resolution marks the beginning of a firm international intervention aimed at protecting the rights of the Sri Lankan people and paves the way for greater respect for the rule of law and international law.

The resolution comes at a time where there is almost complete consensus among people that something has gone radically wrong in Sri Lanka in terms of its political system and administrative systems, including the administration of justice. There are common concerns that the country is on the verge of an unprecedented economic, political and social crisis.

Above all, there is a public perception that it is futile to expect any positive move on the part of the government, as well as the political establishment as a whole, to deal with the ever-deepening crisis.

The way to develop a vision of how to deal with this dangerous situation can only emerge from the engagement of the people themselves in a conversation on the issues.

The resolution passed by the UNHRC could pave the way to improving the dialogue among people on pressing problems that are crying out for solutions. This could be an opportunity to overcome all forms of censorship, including self-censorship, that prevent people’s participation in public debates of how their problems could be resolved.

Thus, the resolution places grave responsibilities not only on the government but also on the people as a whole. It is their nation that is faced with the most acute crises in all spheres of life that it has experienced in modern times. Therefore, the resolution is seen as the opportunity for the development of well thought out strategies to overcome this situation. The extent to which the resolution bears fruits will depend on the responsible reactions by Sri Lankan people themselves.

Where are you really from?