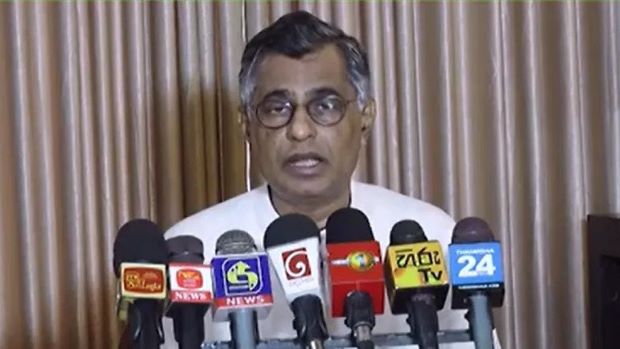 Ranawaka said as far back as November 2021, the Chairman of Ceylon Electricity Board (CEB),  M. C. Ferdinando, had written to the then Treasury Secretary asking for an agreement to be signed with Adani Green Energy after he was directed to ‘facilitate’ the project.

Ranawaka said he questioned at the Parliament’s Committee on Public Enterprises (COPE) whether there was anything in writing from India that Adani was representing the Indian government.

“As per this directive, I assumed this is a proposal of an investor backed by the Government of India on the basis of the bilateral discussion between two heads of states,” the letter had said, noting, “Therefore on the above basis, it is logical to assume that this is an investment proposal on the basis of G-G and can be processed as an investment channelled through the BOI as required under Cabinet Appointed Management Committee on Investment Process.

Ranawaka, questing whether it was a “Government to Government deal” noted that in the November 2021 letter the Chairman had said there was a direction from the president and the prime minister.

“President has denied this. So did the direction come from the prime minister?” he queried.

Following President Gotabaya Rajapaksa’s denial of Ferdinando testimony to COPE, Ferdinando on Sunday (12) denied that he was pressured by anyone over the Adani deal and retracted comments made to COPE.

Several events have taken place since the November letter.

In March 12, the CEB, the Board of Investment (BOI), the Finance Ministry and the Sustainable Energy Authority had signed an agreement giving the go ahead for a feasibility study to be conducted of the green energy project.

Ranawaka said Adani had proposed a price of around 7.8 US cents per unit, which was close to double the market rate.

Under Sri Lanka’s Electricity Act, a Government to Government deal can be made with cabinet approval without competitive tender.

On Thursday (9), Parliament, amid vocal opposition, adopted changes to the Electricity Act to end competitive tenders. “Under the change a feed in (non-market pre-determined) tariff could be given without limit,” Ranawaka said. “So the result if the deal cannot be done as a Government-to-Government deal, space has been created to do this project through another means.”