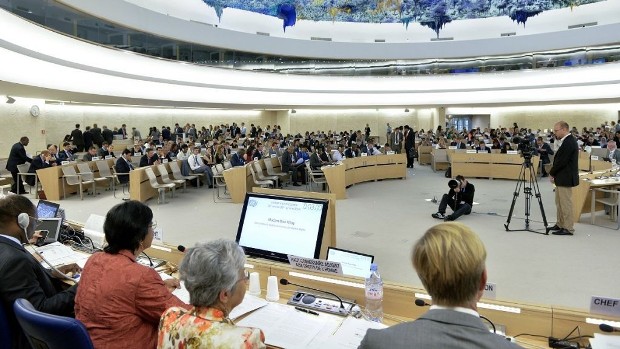 COLOMBO – The Gotabaya Rajapaksa government is unfazed by the possibility of Western nations taking a hostile stance at the March session of the UN Human Rights Council UNHRC) in Geneva.

In sharp contrast to the past, Sri Lankan Tamil leaders (mainly from the Tamil-majority Northern Province) have united and presented a joint charter of demands to the UN. For the first time, disparate and mutually antagonistic leaders like R. Sampanthan, C. V. Wigneswaran and Gajendrakumar Ponambalam, have banded together.

The unity was brought about by the powerful and moneyed Tamil Diaspora in the West. The current unification will mark a sea change in Tamil politics if the unity on key issues is maintained beyond the March session of the UNHRC.

However, the Gotabaya regime in Colombo is unfazed by the prospect of facing intense hostility. A top source in the regime pointed out that the Western nations (which will stand in for the United States as the US is not a member of the UNHRC) will not have the gumption to lecture to Sri Lanka about human and democratic rights after the Black Lives Matter movement and the vandalism and riotous behaviour of defeated President Trump’s followers at the Capitol, in Washington DC. Colombo feels that America’s failure to control COVID-19 and increasing unemployment only shows there is no magic wand to solve national problems.

The US, which pushed anti-Sri Lanka resolutions at the UNHRC in the past, is not only in a dire state of disarray at home, but is also not a member of the UNHRC. Interestingly, the Trump Administration had showed little respect for the integrity of the UNHRC when it quit the Council saying it was biased. The US had thus lost its moral authority to use the Council to browbeat Sri Lanka, the source said.

“The US has to first put its house in order, restore democracy, instil in its population and leaders respect for the law and the constitution and curb racism. The Biden Administration, which will come into being on January 21, will be busy doing precisely this,” the source added.

The Gotabaya administration has already declared that it will not co-sponsor any resolution against itself. And therefore, any resolution will have to be re-worded, incorporating new content.

The contents of the new resolution will have to take into account, the Tamils’ new and radical demands, new issues like the burial of Muslims who had died of COVID, and of course Colombo’s contention that the Tamil or the Muslim issue is a domestic issue to be solved internally in Sri Lanka without outside interference. Colombo’s argument is that a lasting solution for a national question can be found only through domestic mechanisms and the engagement of the parties directly concerned with the problem uncomplicated by foreign hands or foreign interests.

The Tamil parties’ have  proposed that the UN Security Council and the General Assembly take up the Tamil case and refer the matter to the International Criminal Court (ICC) or any other international accountability mechanism to inquire into allegations of genocide, war crimes and crimes against humanity. The Tamils are also asking for a UN evidence gathering mechanism such as the one set up in the case of Syria with a 12-month timeframe to finish its work.

The Tamils’ letter embodying these demands had been sent to the UN and UN officials in Colombo had discussed the contents with the Sri Lankan Foreign Ministry. The various inputs will eventually be incorporated in the UNHRC resolution.

Commenting on the Tamils’ demands, the foreign ministry source said: “These demands will only harden the stand of the majority community, whose views no democratic country can ignore. It’s time the Tamils realized this and accepted the thesis that the liberation of all Sri Lankans, irrespective of ethnic or other identities, lies in economic development on an equitable basis.”