Dissent art comes into its own 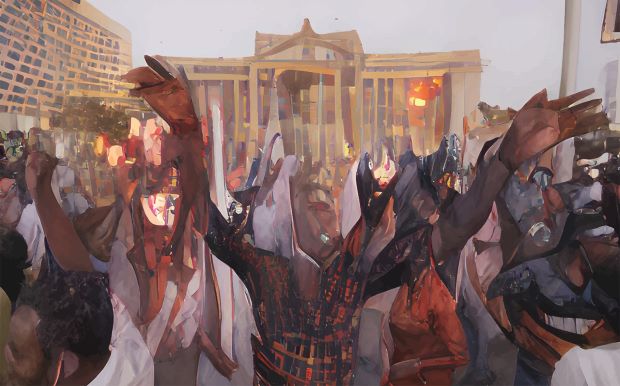 There is a lot of blood; faces grotesquely distorted, hands dripping red, bared fangs and dismembered body parts. Disgraceful alliances are mocked, leaders are lampooned and ridiculed and suffering and repression are starkly portrayed. The profusion of protest art in the form of paintings, drawings, cartoons and memes are fearless and unrelenting, flooding social media and reflected physically at the art gallery at GotaGoGama.

In an astounding turn of events, most mocked is President Gotabaya Rajapaksa, once seen as a ruthless and frightening leader not to be crossed for fear of the ultimate punishment. In today’s protest art he is depicted as a defanged, bloodstained satan. Mahinda Rajapaksa, once a popular and respected leader, is seen in much the same terms while Basil Rajapaksa cannot escape his crow avatar. The mighty have fallen very far.

While protest art is not new with veterans such as Chandragupta Thenuwara, Jagath Weerasinghe, Thamotharampillai Shanaathanan and Anoli Perera leading the way with the start of the civil war and during the repressive first term of the Rajapaksas, it is experiencing a renaissance in the wake of the spontaneous protests sweeping the country demanding an end to a ruthless and corrupt regime bent on causing divisions between people of different religions and ethnic communities.

Fear of reprisals and censorship have been thrown to the winds. Contemporary artists such as Muvindu Binoy, Abdul Halik Azeez and Firi Rahman are experimenting with different styles and media while social media is exploding with works of digital artists such as Nuwan S. Kekulandara, Ahamed Shums, Ravindu, Ushen Fernandopulle and Arshad Greasy.

A defining moment for protest art came on the afternoon of May 9 when government sponsored thugs attacked peaceful protesters, burnt tents and destroyed makeshift structures at GotaGoGama. They also demolished a memorial to the victims of the Easter Sunday attacks, which was quickly replaced by a sculpture of a giant metal slipper crushing a can of tear gas.

Caught up in the attacks was the GotaGoGama’s artist’s hut occupied by Sujith Rathnayake. Several landmark works were burnt along with paints, brushes and canvases but the hut was soon transformed into an art gallery and a space for artists to work in. The ashes of the original hut are preserved, cordoned off by black and yellow crime scene tape.

Muvindu Binoy’s new exhibition, Survival of the Fragile, which is showing at the Saskia Fernando Gallery, portrays a significant shift in the relationship between Sri Lanka’s politicians and the people they govern. His work depicting scenes from GotaGoGama, Protest in Colour, is part of the exhibition.

Muvindu answers some pertinent questions about the escalation of protest art, why he got involved in the struggle and the future of dissent through art.

QUESTION:  From early on artists, singers and performers have been part of the aragalaya. How important do you think art has been in sending out protest messages?

ANSWER – In Sri Lanka there has been a long history of propaganda art with artists being taken to court and going to jail. When the struggle started, there were no tents. There was a festive mentality and celebrations. People, not artists in particular, began depicting the president and his regime in an amusing way. Everything changed when artists started creating images based on the Rajapaksa family. This got my attention because memes did more for the energy of the protests than paintings. It was a motivation for people to come out of their comfort zones, get angry and be part of the protests. Memes are casual and have a funny approach that takes away the power of violence. President Rajapaksa was a strongman president but now people are not frightened at all. Memes have no copyright so anyone can make anything and post it so it has a much wider reach.

Q: Why did you get involved in the aragalaya?

A: For a long time I was a protest artist but my work was largely reacting to situations I saw on a daily basis. Most of the time people didn’t relate to my work. I realized that the sudden art boom that came with the protests was the best time for me to create more work and to use the space to make my voice heard.

Q: Has coming together for the protests created a feeling of unity among artists?

A: There has been protest music and political art for different audiences but now there is a coming together to create one sound. There is a cultural renaissance for art; people are not just professional artists but they also are writing about art and they are craftsmen.

Q: How can your art bring about actual change?

A: I see it in two ways; the first wave was a cultural one where everybody was out celebrating. The second wave came with the May 9 attacks. Protest art changed mainly because Sujith Rathnayake’s tent was destroyed but it went on to be bigger. People know Sujith as a pioneer in political art so now the art wasn’t just memes and faces but became more serious in tone and approach. The current situation should be the third wave. Things are getting dull at GotaGoGama so it is time for artists to make a set of work to portray the future vision we want to see to give people some hope. We have gone past the crow art and we need to move into years rather than days. Gallerists, artists, musicians and event managers must grab everyone’s attention. There is a different generation now with a heavy use of social media and platforms so art can be put on different platforms, including TikTok, for wider reach. People have moved away from mainstream TV because it was not showing what was happening on the ground and are turning to live video for their news. In this way, people have become the media. We are also documenting history as it happens and it can be archived. Photo journalists are willing to give their photos and footage to be used fairly, decentralizing the media. It is the first time this has happened here.

Q: Your protest in colour series has an almost revolutionary feel. What were you trying to convey?

A: The main photos I used were the ones I saw in the news media and I carefully selected a few to work on. Since we have seen a renaissance, the larger than life images have an epic feel.

Q: How has becoming involved in the aragalaya and creating art around it changed you as a person?

A: It has changed me so much. Since I work with multiple media I wanted to spread my wings and focus my energy on dissent. If you are an artist best thing is to use your medium regardless of the circumstances. You can use your skills use to energize people. Anyone who listens to a song or reading poetry can get a sense of hope; art uplifts anyone who is struggling.

-This article was originally featured on groundviews.org