They were traders, financiers and slave ship owners, writes Prof. Pedro Machado in his book ‘Ocean of Trade: South Asian Merchants, Africa and the Indian Ocean’ 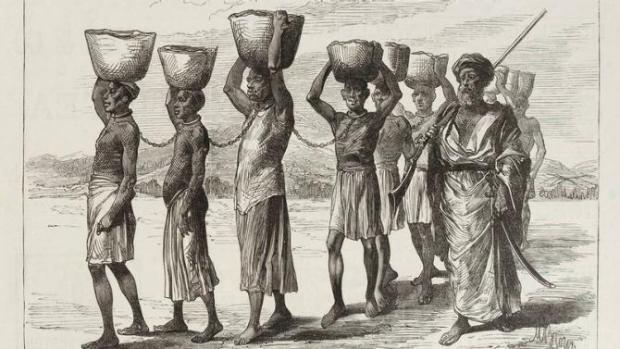 The trading communities of Gujarat and Sindh had been involved in the world trade of African slaves in one way or the other since at least the 15th Century.  But it was in the 18th and 19th Centuries that these merchants became central figures in the trade, even finding ways to circumvent the British anti-slave trade law to continue with the business till the middle of the 19thCentury. So says Prof. Pedro Machado of the Department of History, Indiana University, Bloomington, in his fascinating book: Ocean of Trade: South Asian Merchants, Africa and the Indian Ocean.

Abyssinian or Ethiopian slaves (also called Habshi or Siddi) were used in military service in Bengal in the third quarter of the 15th Century, while African captives were sent to the Deccan plateau in central India. In Gujarat they served prominently in the armies of domestic rulers and their navies. By the 1630s and 1640s, Indian merchants were purchasing African slaves at Red Sea ports such as Mocha and Jidda for markets in Western India.

Later in the 18th  and 19th Centuries, trading communities from Gujarat like the Vanias (Banias), Bhatias, Khojas, and Bohras, both Hindu and Muslim, were part of the world slave business network as traders as well as financiers and slave ship owners.

The trigger for this enterprise was the rising French and Brazilian demand for African slaves from Mozambique from the early 19th Century onwards. West Africa had by then dried up as the principal source of slaves because of British policing following the abolition of the slave trade by law in 1807.

By the 1810s, Gujarati merchants were in the centre of the business as the trade relied on Gujarati currency, which, interestingly, was cotton textiles, much in demand in East Africa. The Gujaratis were trading cloth for ivory, for which there was a craze in India. Ivory was used in royal decorations and on Hindu religious occasions.

Machado says although Gujarati traders dealt in slaves, their focus was not on the slave trade. Their main interest was in ivory. They began their involvement in the slave trade as financiers using cotton textiles as money. But it did not take them very long to become slave traders themselves, supplying African slaves to South America (especially Brazil which needed slaves to work in the plantations) and to South Asia, where these slaves were seen as good soldier material and as loyal domestics in the houses of rich merchants.

Indian rulers in Gujarat and Maharashtra used African slaves as bodyguards. Having Africans in service was considered a mark of high status. The Brahmin rulers of Maharashtra called Peshwas even used them as cooks as the Africans did not form part of the Hindu caste hierarchy of high and low castes or clean or unclean castes. Merchants in the seaborne trade found the African slaves to be excellent seamen and invariably used them on their trading vessels. Often joining as boys, African ship labourers gained experience in navigation even through rough waters.

According to Machado, Indians got into the Mozambique-based slave trade in 1805-1806 when the wealthy Gujarati trader, Shobhachand Sowchand, bought the vessel General Isidro from Joaquim do Rosario Monteiro, a leading Portuguese slave merchant with whom he had a business relationship since the mid-1790s.

Shobachand was keen on exploiting the expanding trade in African slaves who were in demand in the French islands of Mauritius and Réunion. There was a demand for slaves from the Arabian Peninsula also. Slaves were shipped to Cape Town for use by Dutch and English companies who in turn shipped them to South and Southeast Asia.

“Such was the expansion in African slave trading that, by the second decade of the nineteenth century, slaves were a mainstay of the export economy of northern Mozambique,” Machado notes.

Before the Vaniya merchants joined the slave trade they were buyers and users of slaves. They used saves as workers in their ships, loaders and even as navigators. As money lenders to slave traders, they were underwriting the business and therefore were part of it, albeit indirectly. The borrowers included the Portuguese, the Dutch, the French, and the English besides Arabs who were major slave traders before the Portuguese arrived in the 15th Century.

The Portuguese were hard on the Muslim Arabs as they feared that they would convert the African slaves, especially the Catholics among them, to Islam. The Portuguese rulers of Mozambique banned the sale of slaves to the Arabs and also to the Indian Hindus. Shocked the Hindu merchants petitioned the Portuguese authorities to exempt them on the plea that Hinduism is not a proselytizing religion. The Portuguese relented and allowed the Hindu Gujaratis to resume the slave trade.

In 1746, Indian merchants were allowed to own and openly trade in slaves. This happened because of a growing demand for slaves across the world. No Gujrati Vaniya ship sailed from the Mozambique coast for Diu or Daman in India without a cargo of slaves, Machado notes.

From the mid 18th Century onwards, slave merchants began to finance their purchases of Gujarati textiles with Spanish silver dollars brought by French and Brazilian slave trading vessels. But the introduction of silver currency did not affect the Gujarati merchants because there was a huge market for silver in India, where the precious metal could be utilized by merchants to secure credit from bankers and fellow merchants. Machado cites data between 1600 and 1800 to show that around 28,000 tonnes of silver, which represented about 20% of the world’s production of 142,000 tonnes, had entered the Indian subcontinent from the Persian Gulf and the Red Sea, Central, and Southeast Asia, and Europe via the Cape of Good Hope route.

The abolition of the slave trade by Britain in 1807 resulted in a great deal of pressure on the merchants dealing in slaves, especially the Portuguese. But being Britain’s ally, Portugal was allowed to trade in slaves only between Portuguese territories. In 1815 and 1817 trade was further restricted to Portuguese possessions in Africa south of the equator. Nevertheless, the slave trade boomed as more than 150,000 slaves were transported from Mozambique to Brazil. Indian merchants were co-beneficiaries. Prominent Indians in the Brazilian slave trade were Premchand Virji and Narsin Kunwarji.

In those days, slaves were also used as currency apart from cotton textiles and silver. Textiles could be bought or debts could be settled with slaves as a medium of exchange. Ruling families gifted slaves to loyal and favoured officials. Slaves were also acquired through outright purchase. Subordinate chiefs, in their turn, sent female slaves to the Maratha rulers called Peshwas, as a form of tribute.

Female slaves and young boys were shipped to India throughout the 18th Century. Kutchi women were sent to East Africa to acquire young girls, some of whom were imported to become the wives of African slaves. African female slaves performed ancillary military tasks in the Maratha armies in Maharashtra. East African slave women prepared gunpowder in the arsenals of the Maratha forts.

However, Brazil’s ban on the import of slaves in 1830, and the Royal Navy’s anti-slave Trade Patrol along the East African coast and Mozambique Channel gradually brought the curtains down on the slave trade and the Indian merchants’ involvement in it.

China says it will allow couples to have 3 children, up from 2