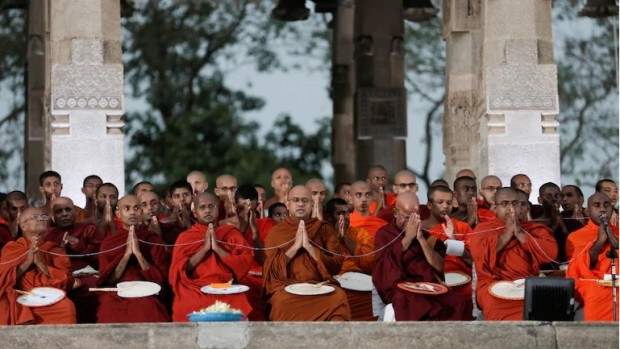 Prayers and ceremonies for the people of India are being held in different parts of Sri Lanka, with the chanting of ‘Rathna Sutra’ and special prayers being conducted in various places of worship across the country.

The chanting of Rathna Sutra’ was conducted at the Kapilavastu Buddha Relics Chamber of Waskaduwa Rajaguru Sri Subhuthi Maha Viharaya under the auspices of Most Ven. Dr Waskaduwe Mahindawansa Mahanayake Thera on April 29, while the Bharatha Ashirvada Puja led by Most Ven. Dr. Omalpe Sobhitha Nayake Thera was conducted at the Chamber of holy Buddha Relics at Sri Bodhiraja Monastery in Embilipitiya and at the Agra Sravaka Viharaya, Maligakanda, under the auspices of the Mahabodhi society on May 1. The Puja was also held at the  Thiriyaya Raja Maha Viharaya in Trincomalee on May 2,  at the Gangaramaya Temple, Colombo on May 3 and at  the Sri Naga Vihara in Jaffna on May 5.

A statement from the Indian High Commission in Colombo said the Sri Lanka Broadcasting Corporation and the Ministry of Buddhasasana, Religious and Cultural Affairs were also jointly organizing a 7-day recital from Thursday (6).

Meanwhile, the Hindu Religious Forum organized a special prayer including Ved Paarayan and Thirumurai recitals at Kandarmadam Nataraj Temple in Jaffna on Friday (April 30). Special prayers were also organized by the Shirdi Sai Centre in Colombo on Sunday (2). A special Puja dedicated to Goddess Dhanvantari for the health of people of India is set to be conducted at the Mayurpathy Temple in Colombo on Friday (7), while a Mahamritunjaya Yagya is set to be held at all five Eshwarams in Sri Lanka on Saturday (8).

Prayers were held for India during the Sunday service at the Anglican Church, while Sri Lankan nationals from various walks of life who received their education in India came together to express their solidarity with India on April 27.

The statement noted that hashtags, such as ‘thinkingofindia’, ‘PrayForIndia’, were also  trending on social media in Sri Lanka and that there were public calls for various other unique solidarity gestures by several organizations and business enterprises.

The statement recalled that President Gotabaya Rajapaksa, in a letter to Indian Prime Minister Narenda Modi on April 28, had expressed deep empathy and concern about the situation in Sri Lanka, and that Prime Minister Mahinda Rajapaksa had also conveyed his sentiments and solidarity to Prime Minister Modi during a meeting with High Commissioner Gopal Baglay on April 29.

The High Commission said he was touched and humbled by the prayers and well wishes, deeming it a is a true reflection of the deep people to people connect and the millennia-old bonds between India and Sri Lanka.

The US birth-rate has dropped again

US announces $5.75M in new funding for Sri Lanka

US announces $6 million in emergency assistance to Sri Lanka