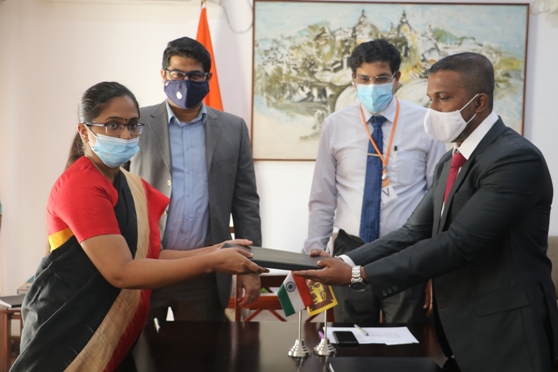 COLOMBO – R. A. Constructions was on Tuesday (18) awarded the contract for the construction of transit housing units in Mannar, under an Indian grant assistance of Rs 300 million. The agreement was signed by R A Constructions and. Banu Prakash, Counsellor, Development Cooperation, High Commission of India in Colombo.  Vinod K. Jacob, Deputy High Commissioner of India and S. Hettiarachchi, Secretary, Ministry of Tourism, witnessed the ceremony.

The Indian High Commission in a statement issued on Wednesday (19), said the project envisages the construction of 144 transit housing units in Mannar as identified by Government of Sri Lanka under an Indian grant assistance of Rs 300 million.

It said India’s flagship Housing Project envisaging construction of 50,000 houses in various parts of Sri Lanka at an overall outlay of Rs 33 billion under full grant basis is almost complete. The statement also noted that an agreement for the construction of an additional 10,000 houses in the plantation areas at an outlay of Rs 11 billion on grant basis was signed in August 2018, and close to 3000 houses were being built under the model villages housing program in all districts of Sri Lanka, taking the total number of houses being built by India in Sri Lanka to 63,000.

It said the projects were in continuation of the Indian government’s people-oriented development cooperation with Government of Sri Lanka. India’s overall development portfolio in Sri Lanka currently stands at close to Rs 517 billion, out of which Rs 92 billion is grant assistance and more than Rs 425 billion under Lines of Credit and Buyer’s Credit.

Sub-committee to draft 20th amendment to Sri Lanka constitution; 19A out, salient features to remain