In Washington, two shootings leave a community on edge 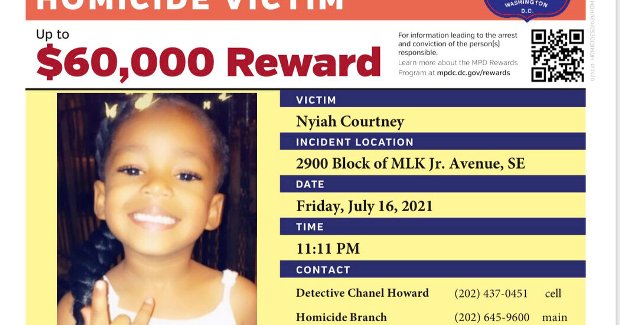 WASHINGTON – In her short life, Nyiah Courtney, 6, played a lot of roles using her imagination. She was a doctor, a teacher, and a babysitter. She went on safaris and rescued animals. She once washed her teacher’s hair in a play sink, cut it and styled it.

On Friday (16), Nyiah was fatally shot in a late-night shooting in southeast Washington, DC, that also left five adults, including her mother, wounded. She had been riding her scooter on a sidewalk when shots rang out.

“It’s hard to imagine a world without her,” said Dayna Hudson, who taught the girl in prekindergarten and kindergarten.

As of Friday, 102 people, including Nyiah, had been the victims of homicide in Washington thus far in 2021, according to data from the Metropolitan Police Department. The death toll was 198 in all of 2020, when homicides increased 19% over 2019.

“We don’t let people get away with murder in our town,” Bowser said. “We have to stand up against them.”

The gun violence Friday night took place on a commercial stretch of Martin Luther King Jr. Avenue, in a neighbourhood where residents said gunfire was common after dark. It was followed Saturday night by the shooting of three people outside Nationals Park, about 2 miles away. The wounds at the ballpark weren’t life-threatening, but the panic set off by the distinct sound of gunshots, which rang out during the sixth inning of a game with the San Diego Padres, sent more than 30,000 fans inside the stadium scrambling for cover.

In a joint statement Sunday (18), Bowser and the Washington Nationals said that the Metropolitan Police Department did not believe the team, the ballpark or fans in attendance were the target of the shooting, and that the episode appeared to have involved a dispute between people in two vehicles.

“We stand together against senseless acts of gun violence in the city we love,” the statement said. “Gun violence — no matter where it occurs in our city — is unacceptable and will not be tolerated.”

At the news conference Saturday, Councilman Trayon White Sr., who represents the district where Nyiah was shot, called on residents to take action.

“This ain’t nothing new for us,” White said. “It’s been going on far too long, and it’s on us to save us. Nobody’s coming to save us but us.”

On Sunday, Nationals Park was business as usual, as fans poured in for a game between the Nationals and the Padres. But the memories of a chaotic night were still fresh for Nationals manager Dave Martinez.

“I love this city. This city’s my home,” Martinez said at a news conference before the game Sunday. “It can get crazy; we all know that. And we all want to feel safe. I can tell you that inside this ballpark, I feel safer than ever, I really do. We care about each other. We don’t want anybody getting hurt.”

Across the Anacostia River, in the neighborhood where Nyiah lived and died, the Courtney family, which was not available for comment Sunday, wrangled with the loss of Nyiah and her mother’s injury.

Hudson, her teacher, said she would remember Nyiah as a “kind, compassionate, funny, sassy” girl who was a “wild card” at school talent shows, and quick with a joke.

“My heart hurts for her family and loved ones, and for her classmates that won’t get to see her when first grade starts this fall,” she said. “Nyiah Courtney is and always will be a part of our school community.”

How strong is Trump’s grip on the GOP?