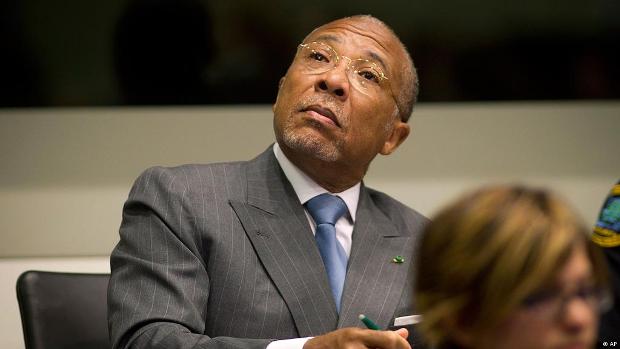 Charles McArthur Ghankay Taylor (January 1948 -), former Liberian politician served as the 22nd President of Liberia from August 2, 1997 until his resignation on August 11, 2003, as a result of the Second Liberian Civil War and growing international pressure

Born in Arthington, Montserrado County, Liberia, Taylor earned a degree at Bentley College in the United States before returning to Liberia to work in the government of Samuel Doe. After being removed for embezzlement, he eventually arrived in Libya, where he was trained as a guerrilla fighter. He returned to Liberia in 1989 as the head of a Libyan-backed rebel group, the National Patriotic Front of Liberia, to overthrow the Doe government, initiating the First Liberian Civil War (1989–1996). Following Doe’s execution, Taylor gained control of a large portion of the country and became one of the most prominent warlords in Africa. Following a peace deal that ended the war, Taylor was elected president in the 1997 general election.

During his term of office, Taylor was accused of war crimes and crimes against humanity as a result of his involvement in the Sierra Leone Civil War (1991–2002). Domestically, opposition to his government grew, culminating in the outbreak of the Second Liberian Civil War (1999–2003). By 2003, Taylor had lost control of much of the countryside and was formally indicted by the Special Court for Sierra Leone. That year, he resigned, as a result of growing international pressure; he went into exile in Nigeria. In 2006, the newly elected President of Liberia, Ellen Johnson Sirleaf, formally requested his extradition. He was detained by UN authorities in Sierra Leone and then at the Penitentiary Institution Haaglanden in The Hague, awaiting trial by the Special Court. He was found guilty in April 2012 of all eleven charges levied by the Special Court, including terror, murder and rape and on this day in May 2012, he was sentenced to 50 years in prison. Reading the sentencing statement, Presiding Judge Richard Lussick said: “The accused has been found responsible for aiding and abetting as well as planning some of the most heinous and brutal crimes in recorded human history.”

EU asks for big penalties against AstraZeneca over dose delays