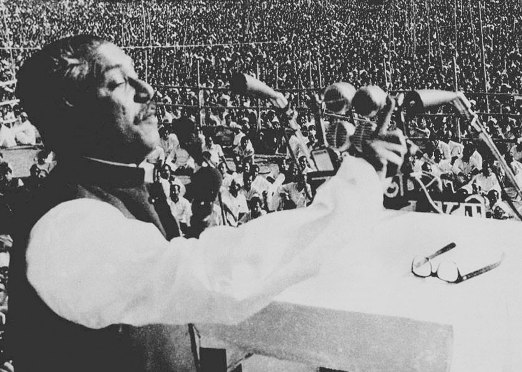 Over one million gathered at the Ramna Race Course in Dhaka on this day in 1971 to listen to the  7 March Speech by Sheikh Mujibur Rahman, founding father of Bangladesh, delivered during a period of escalating tensions between East Pakistan and the powerful political and military establishment of West Pakistan. In the speech, Rahman proclaimed: “This time the struggle is for our freedom. This time the struggle is for our independence.” He announced a civil disobedience movement in the province, calling for “every house to turn into a fortress”. The speech inspired the Bengali people to prepare for a war of independence amid widespread reports of armed mobilization by West Pakistan. The Bangladesh Liberation War began 18 days later when the Pakistan Army launched Operation Searchlight against Bengali civilians, intelligentsia, students, politicians, and armed personnel. On October 30, 2017, UNESCO added the speech in the Memory of the World Register as a documentary heritage.