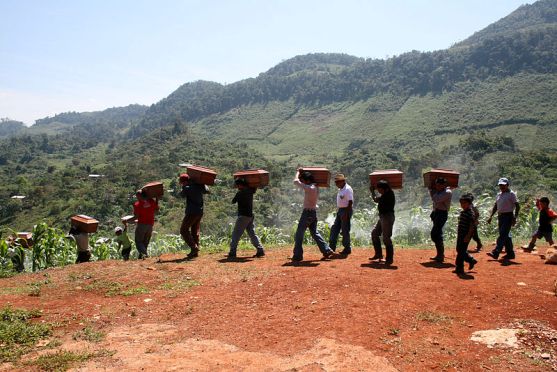 The 36-year long civil war fought between several leftist groups representing the indigenous people and poor and the government came to an end after Comandante Rolando Morán of the Guatemalan National Revolutionary Unity and president Álvaro Arzú signed a peace treaty under the supervision of the UN. Morán and Arzú received the Nobel Peace Prize for their role in bringing peace to the country.

Caption- Queqchí people carrying their loved one’s remains after an exhumation in Cambayal in Alta Verapaz department, Guatemala. Since 1997, the Centre of Forensic Anthropology and Applied Sciences (CAFCA) has been helping to heal the deep wounds caused by Guatemala’s internal conflict. The impact of CAFCA’s forensic work is twofold: It helps families to find their loved ones and come to terms with their loss and it gathers the evidence needed to bring their murderers to justice