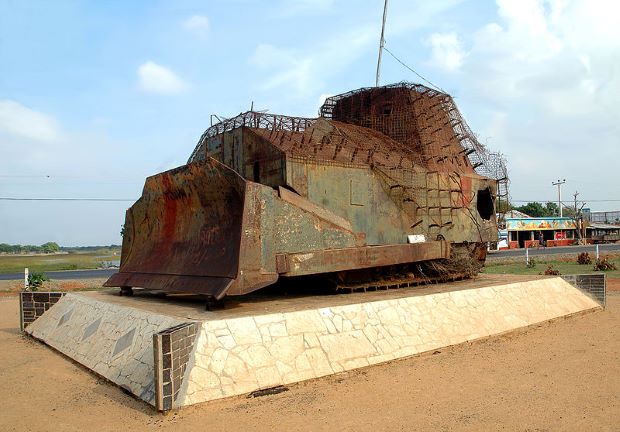 After a 26-year military campaign, the Sri Lankan Armed Forces militarily defeated the Liberation Tigers of Tamil Eelam (LTTE) in May 2009, bringing the civil war to an end on this day.

Fought from 1983 to 2009, the Sri Lankan Civil War began with intermittent insurgency against the government by the Velupillai Prabhakaran-led  LTTE, which sought  to create a Tamil Eelam in the north-east of the island, due to the  continuous discrimination and violent persecution against Sri Lankan Tamils by the Sinhalese dominated Sri Lankan government.

Violent persecution erupted in the form of the 1956, 1958, 1977, 1981 and 1983 anti-Tamil pogroms, as well as the 1981 burning of the Jaffna Public Library. These were carried out by the majority Sinhalese mobs often with state support, in the years following Sri Lanka’s independence from the British Empire in 1948. Shortly after gaining independence, Sinhala was recognized as the sole official language of the nation.

Immediately following the end of the war, on May 20, 2009, the United Nations estimated a total of 80,000–100,000 deaths. However, in 2011, referring to the final phase of the war in 2009, the Report of the Secretary-General’s Panel of Experts on Accountability in Sri Lanka stated, “A number of credible sources have estimated that there could have been as many as 40,000 civilian deaths.” Other sources quoting discrepancies in the census figures state that up to 140,000 people were unaccounted for during this period alone.

The Sri Lankan government has repeatedly refused an independent, international investigation to ascertain the full impact of the war.

Photo Caption – An improvised armoured bulldozer of Liberation Tigers of Tamil Eelam used in the First Battle of Elephant Pass (1991). Today, it is on display as one of the Sri Lankan Civil War memorials – AntanO

After the fall of Mariupol, the fates of hundreds of fighters hang in the balance

Sri Lanka to default on debt, no money for fuel, says minister