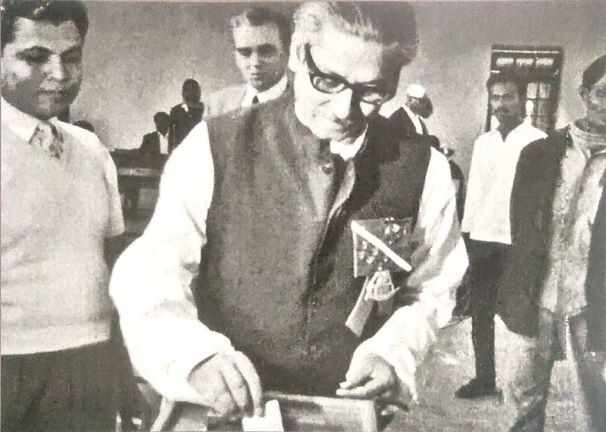 Divided during the Partition of British India, East Bengal became the most populous province in the Dominion of Pakistan and was renamed East Pakistan in 1947, with Dhaka becoming the country’s legislative capital. The Bengali Language Movement in 1952; the East Bengali legislative election in1954; the 1958 Pakistani coup d’état; the Six point movement of 1966; and the 1970 Pakistani general election, resulted in the rise of Bengali nationalism and pro-democracy movements. The refusal of the Pakistani military junta to transfer power to the Awami League led by Sheikh Mujibur Rahman led to the Bangladesh Liberation War in 1971, in which the Mukti Bahini (guerrilla resistance movement) aided by India waged a guerrilla war. The conflict saw the 1971 Bangladesh genocide and the massacre of pro-independence Bengali civilians, including intellectuals. The new state of Bangladesh declared on this day in 1972, became the first constitutionally secular state in South Asia. Islam was declared the state religion in 1988. And in 2010, the Bangladesh Supreme Court reaffirmed secular principles in the constitution. Today, Bangladesh is the eighth-most populous country in the world, with a population exceeding 163 million people in an area of 148,460 square kilometres (57,320 sq miles).

Photo Caption – Sheikh Mujibur Rahman casting his ballot during the 1970 general election, which led to the breakup of East and West Pakistan; and the independence of Bangladesh – Wikipedia

Should India bail out Sri Lanka?