Alas, are we not thankful for clean drinking water? 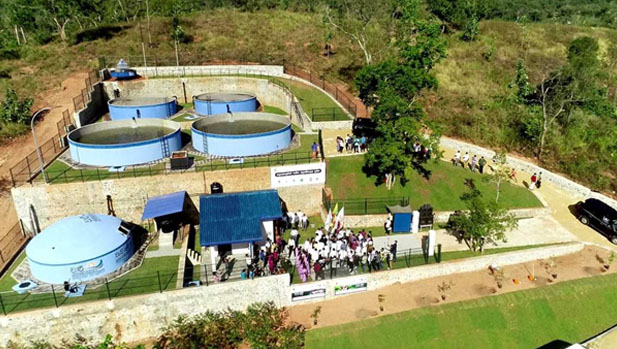 Kurunegala is a major town in Sri Lanka, where it is the capital city of the North-Western province. The town of Kurunegala is based upon plain area with the exception of surrounding rock outcrops. The villagers face a scarcity of good drinking water and therefore water is considered a rare asset to this area. Simultaneously, the people are constantly diagnosed with severe kidney-related diseases. The community contribution for the villagers has been given a dawn of new hope with the implementation of a new water project with the golden opportunity for the provision of clean drinking water. With this meritorious deed in mind,a drinking water project has been constructed in the Polpithigama Thalakolawewa village in the Kurunegala District which was recently vested to the public. It has come to the attentionthat the hopes of the innocent community in this area have been dashed.Many complain that the water available from the new project is not suitable for drinking where majority of complaints mentionafter the consumption of the water contains a bitter taste and causes an inflammation of the stomach and chest. It is alleged that work had been completed with the intervention of an NGO where these days the locals are forced to consume this water using various indirect and direct influences claiming that it is suitable for drinking.It is also reported that the total cost of this project is close toa thumping sum of Rs. 120 million. With the implementation of this project in 2018, the project has received foreign grant throughtwoNGOs alongside the Ministry of Mahaweli Development &Environment. However, most of the residents of the area claim that the whole project was supported and carried out by a plethoraof NGOs. The responsibility of this calamity should be shared to the relevant ministry involved; however, no action had been taken by the senior officials of the ministry and the concerned NGOs had a secret deal between them as per hearsay of the locals.
This type of work could have been executed under the National Water Supply & Drainage Board with assured quality as a well experienced and specialized institution for this type of construction; however reliable sources have revealed that retired Engineers from the National Water Supply & Drainage Board had been employed for exorbitant consultancy contracts in the disguise of NWS&DB officials at the same time tarnishing the sovereignty of this particular government institution.
Currently, the Sri Lankan Navy has stepped to the task of providing free clean drinking water to the residents of this area through a successful water treatment plant. Inevitably, it is questionable as to who was responsible for the implementation of such a multi-million failed project.The responsible authorities including President Secretariat, NWS&DB, Ministry of Mahaweli & Environment should pay close vigilant attention to such projects that cost millions as this has been a grant given for the benefit of the poor local community for the supply of clean drinking water which in turn has been misused.