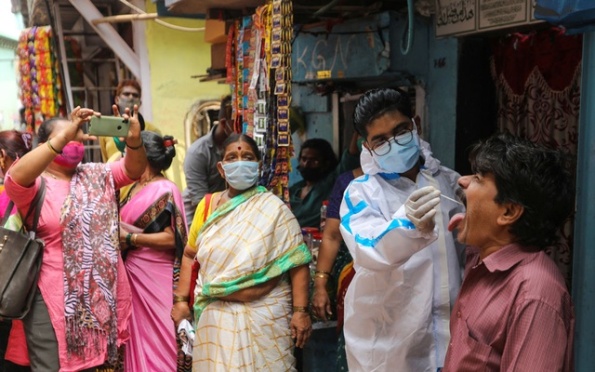 MUMBAI — India is racing to contain a second wave of the coronavirus, but its vaccination campaign is running into doubters like Akbar Mohamed Patel.

A resident of Mumbai’s densely populated slum area of Dharavi, Patel survived a severe bout of the coronavirus in May. The first wave prompted Mumbai officials to seal off his housing complex, confining thousands of people for nearly two months.

Still, the current campaign has been marred by a slow initial government rollout as well as scepticism and apathy from people like Patel and his neighbours. “On social media we come to know this is all a big game to make money,” Patel said. Of the vaccine, he said, “many things have been hidden.”

The coronavirus, once seemingly in retreat, is again rippling across India. Confirmed infections have risen to about 31,600 daily from a low of about 9,800 in February. In a recent two-week period, deaths shot up 82%.

The outbreak is centred on the state of Maharashtra, home to Mumbai, the country’s financial hub. Entire districts of the state have gone back into lockdown. Scientists are investigating whether a new strain found there is more virulent, like variants found in Britain, South Africa and Brazil.

Officials are under pressure from Prime Minister Narendra Modi to aggressively ramp up testing and vaccination, especially in Mumbai, to avoid disruptions like last year’s dramatic nationwide lockdown and resulting economic recession.

“I am very categorical that we should stop it, contain it, just here,” said Dr. Rahul Pandit, a critical care physician at a private hospital in Mumbai and a member of the Maharashtra COVID-19 task force.

Last week, Prime Minister Boris Johnson said that an expected drop in Britain’s COVID-19 vaccine supplies stemmed from a nearly month-long delay in delivery of 5 million doses of the Oxford-AstraZeneca vaccine being manufactured in India. The reasons for the delay are not clear, but the manufacturer, Serum Institute of India, has said shipments will depend in part on domestic Indian needs.

India is a crucial link in the vaccination supply chain. Amid hoarding by the United States and other wealthy countries, India has given away or sold tens of millions of doses to other countries, even as it struggles to vaccinate its own people. Subrahmanyam Jaishankar, the foreign minister, has said that the availability of vaccines in India will determine how many doses go overseas.

While vaccinations were initially available only in public hospitals, India is now giving jabs in private clinics and enormous makeshift vaccination centres, and it is considering making them available in pharmacies, too. Vaccination hours have been extended, and those eligible can register in person and receive a shot the same day, bypassing an online scheduling system.

The Indian government is playing catch-up. Since it launched a nationwide vaccination drive two months ago, uptake has been disappointing. Less than 3% of the population has received a jab, including about half of health care workers. At the current rate, it will take India about a decade to vaccinate 70% of its people, according to one estimate. By comparison, roughly one-quarter of the population of the United States has had at least one jab.

Not everybody in India has the internet access needed to register for a shot online. But the campaign has also been plagued by public scepticism. The government approved a domestically developed vaccine, called Covaxin, before its safety and efficacy trials were even over, though preliminary findings since then have suggested it works.

The other jab available in India is the Oxford-AstraZeneca vaccine, which was suspended in some countries after a number of patients reported blood clots and strokes, though scientists have not found a link between the shots and the afflictions.

Some of the tepid response may come down to apathy. A nationwide study released in February found that 1 in 5 Indian people were likely to have already had COVID-19. Surveys in cities show even higher prevalence rates. The disease is just one among many that people in India worry about, joining tuberculosis, dengue fever and bird flu. Many people are struggling to recover from the huge financial hit of India’s lockdown last year and cannot afford to take time off work to stand in line for a shot.

“These are hand-to-mouth people. Bread, butter depends on their daily work. They can’t sit back and relax and wait for the wave to go,” said Kiran Dighavkar, assistant commissioner of the Mumbai ward that includes Dharavi. “They can’t afford quarantine, so the only option is to vaccinate these people as early as possible.”

Health experts are prodding Modi to do more, including making the vaccine available to more people. Older adults, health care and front-line workers, and some people with medical conditions are currently eligible for shots.

“I would try to put the injection in the arm of every Indian that is 18 years and above, and I would do it now,” said Dr. N.K. Ganguly, president of a medical research institute in New Delhi.

Persuading the 800,000 residents of Dharavi, Asia’s largest slum, to get vaccinated is seen as critical. Residents travel for work to every corner of the city of 20 million. Officials are reintroducing what earlier in the pandemic they called the Dharavi model: If the disease can be contained there, transmission can be curbed citywide and even further afield.

It will not be easy, even though just 3 miles away, a jumbo vaccination centre is administering about 15,000 shots a day, free of charge.

Day and night, Dharavi is teeming with life. People overflow from thin, corrugated metal houses, stacked on top of each other like matchboxes, onto crowded, mostly unpaved lanes strung with loose electrical wire. Animals skitter between parked motorcycles and piles of debris. Shops, tanneries and factories are squeezed next to houses of worship and community toilets.

“We have been OK all this while,” Abdul Razad Rakim, a 61-year-old diabetic, said from a foldout chair in front of the tiny apartment he shares with his wife, Shamim. “Why do we have to go?”

The Mumbai government has enlisted aid groups to set up help desks in Dharavi, where residents can ask questions and complete online registration to make an appointment for a free shot.

Plans are underway to set up a vaccination centre within the confines of the slum and to reopen an institutional quarantine centre with thousands of beds, according to Dighavkar, the assistant commissioner.

Last week, as Maharashtra recorded its highest new case numbers since September, the chief executive of a disaster relief group delivered a pep talk at Gold Filled Heights, an apartment complex largely occupied by members of the Jain religious group, who run many of the jewellery businesses in Dharavi.

“We can’t let the virus spread again,” said the chief executive, Shantilal Muttha. “If it spreads in Dharavi, it becomes a threat for the entire Mumbai and Maharashtra.”

India blames a virus variant as its COVID-19 crisis deepens