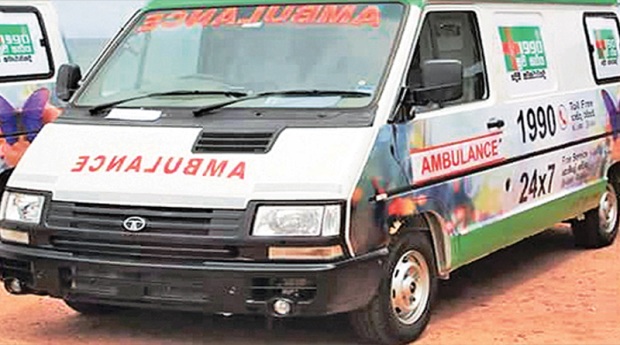 In 2013, Harsha de Silva was travelling with his friends and family in Kuchchaveli, a small town in eastern Sri Lanka, 297 km from the capital, Colombo. They found themselves driving in a cyclone warning. One of their vehicles skidded, hitting lamp posts and a tree. His friend was thrown out of the back window on to the road, critically injuring herself.

She required immediate surgery. They went to the Base Hospital in Kanthale, requesting an ambulance. But there was none, so they had to drive her to Colombo.

Thankfully, his friend had successful surgery and recovered with time. But things could have been different. An ambulance would have made all the difference. “That day I thought if I could do anything to change the pre-hospital emergency healthcare system in Sri Lanka, I will do it,” says Harsha, who was then an opposition Member of Parliament.

In 2015, Harsha became deputy minister of national policies and economic affairs. The Indian government had offered a grant of $7.55m (£5.65m; €6.34m) to Sri Lanka as a token of friendship between the two countries. Harsha presented the prime minister with a proposal: a modern emergency medical service with an ambulance network.

On July 28, 2016, ‘1990 Suwa Seriya’—which translates as the telephone number and ‘vehicle of health’—was launched as a free emergency pre-hospital healthcare service along with a toll-free hotline (the 1990 in the name). Eighty-eight ambulances operated in Western and Southern Provinces. It was a collaborative effort between Harsha and engineer Dumindra Rathnayake, who volunteered as the technology expert of Suwa Seriya.

“Initially we faced a lot of difficulty and criticism from the Government Medical Officers’ Association (GMOA), representing doctors working in public healthcare facilities, and the opposition party,” says Harsha. “When they didn’t let us park the ambulances in hospitals, I decided to speak with the police.”

Sri Lanka has a free healthcare system, and in spite of overcrowding, long waiting times, limited specialized care, and an unequal distribution of resources, it achieves impressive results, with a high life expectancy of 77 years and the lowest maternal mortality rate in South Asia. The country achieved malaria-free status in 2016.

Yet ambulances are few and they mainly belong to expensive private hospitals in the cities. Most citizens, particularly those in rural areas, have to fend for themselves in emergencies.

“In a car accident, another vehicle on the road will transfer the injured patient to the hospital,” says Sabith Liaquat, a medical officer working at the State run Base Hospital in Puttalam, 138 km north of Colombo. In remote areas of the country, he adds, when patients had any sort of pain they would rely on over-the-counter painkillers such as acetaminophen and wait until the next day. “You wouldn’t realize it in Colombo, but when you work in outstations, you realize that some patients waited the entire night to come to the hospital. They didn’t have the means of transport.”

Working in remote areas early on in his career, Liaquat saw the impact this had. “Patient admission delays during an accident will result in blood loss. With no emergency care before the patient was admitted to the hospital, on very unfortunate occasions, it means we were losing a life that could have been saved.”

The situation is not uncommon in South Asia. In Pakistan, ambulance services are mostly offered by non-profit organizations. In India, they are publicly funded by the central and state governments, but the services including drivers and paramedics are employed through private agencies. According to a report in the Indian social science journal Economic and Political Weekly, India’s service suffers from unattended calls, poor response times, and frequent conflict between employees and contracting private agencies, leading to an increase in the “risk of medical errors and consequent loss of clinical quality of EMS [emergency medical services].”

Sri Lanka’s service is modelled on India’s 108 emergency medical service, but has “gone beyond that”, says Harsha, with better equipment and continuous staff training to ensure services run efficiently. He sympathises with his Indian counterparts, who serve a population of over one billion.

With 297 ambulance units, Suwa Seriya covers the entire island, allocating ambulance units based on the area population density, with a total workforce of 1500. The ambulances are parked at police stations around the country, a step taken by the project initiators after the GMOA first rejected the service on political grounds.

The Association, who backed the opposition party at the time, criticized the inclusion of a defibrillator as part of the ambulance’s standard toolkit, worrying that staff was not properly trained to use it. The Association’s secretary, Nalinda Herath, warned the public not to board the “Indian Ambulance Service” because they ran the risk of getting electrocuted. They also expressed anxieties about a flood of Indian employees, although the staff at Suwa Seriya are entirely Sri Lankan.

But perseverance has won through. Although initially drawing on the Indian grant, Suwa Seriya is now funded entirely by the Sri Lankan government as an arm’s length body with autonomy from the health ministry and has won over the GMOA.

The service has proved highly effective, particularly during a terror attack on Easter Sunday 2019, when several places in Sri Lanka including churches and luxury hotels were bombed, leading to more than 250 casualties, including 38 foreign visitors, and injuring at least 500 people.

Harsha says more than 650 000 patients have been transported by the service so far, with an estimated 66 000 lives saved. It also counts over 200 successful emergency childbirths in its ambulances, coinciding with Sri Lanka lowering its infant mortality rate from 7.5% in 2015 to 6% in 2019. One of the mothers even named their newborn baby after Harsha: “I told my wife I had nothing to do with it!” he says.

Suwa Seriya fields 5300 calls and handles 1000 cases a day on average. This has increased during the pandemic to 9000 calls and 1500 cases a day, said Sohan de Silva, chief executive officer of Suwa Seriya in a Facebook Live on June 20. The service has an average response time of 11.25 minutes across the island, outperforming places like New South Wales, Australia (11.4 minutes).

“With the outbreak of COVID-19, our work has been increased,” said Sohan. Public awareness programs, social media campaigns, and mass advertising by the Ministry of Health on electronic media tell people to dial 1990 if they have COVID-19 symptoms, with the ambulances transferring suspected and confirmed cases to testing centres and hospitals, minimizing their exposure to the public.

“We are disinfecting each ambulance after a patient transfer now,” said Sohan. “We are in a pandemic. But it doesn’t mean other emergencies don’t arise. Road accidents happen every day. There are critical patients with heart diseases.”

Sohan applauded the commitment and dedication of his staff. “Sometimes our staff are asked to relocate their accommodation because their landlords suspected they carried the virus. So they would spend their shifts at the police station. Not a single staff member complained.”

In late March, Sri Lanka’s health minister, Pavithra Wanniarachchi, highlighted the important role of Suwa Seriya on the frontline. “Staff of the Suwa Seriya ambulance service should receive national honour for their service of picking up patients as soon as they are informed,” she said during a press conference in March. “They go and pick up patients whether or not they are infected with COVID-19, taking a high risk on themselves.”

“A lot of people are aware of [Suwa Seriya] now,” says Liaquat. “They know they have to call 1990 in case of a medical emergency.” Still, he says, conducting more awareness campaigns for the public would help spread the message to the remotest corners of the country, which electronic media does not reach. He adds that improving the quality of life of the ambulance staff by giving them proper accommodation, washrooms, and other facilities would also have considerable impact on their service.

– Zinara Rathnayake is an independent journalist and this article was originally featured on thebmj,  a weekly peer-reviewed medical trade journal, published by the trade union, the British Medical Association (BMA)

Obama, the best-selling author, on reading, writing and radical empathy