The essentials of participatory constitution making 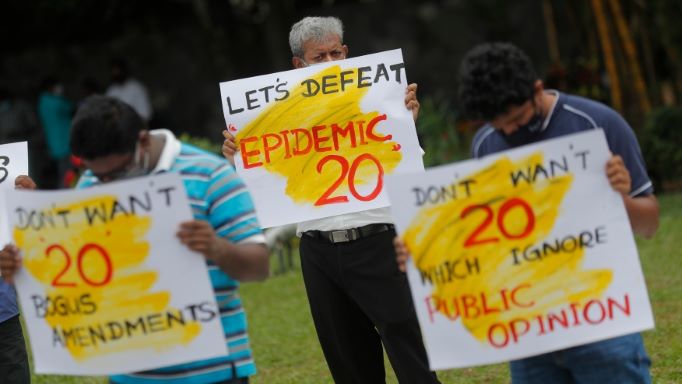 Sri Lanka has entered into a period of crisis that is worse than it has ever faced in recent history. The economic and financial crises will last for a long time even if genuine effort is made to rescue the country even at this stage. However, if the necessary decisions to address the problems are not made, Sri Lanka will reach a point of no return so looking for the solutions of the economic crisis is a central concern.

However, seeking solutions brings up other complicated problems because the economic crisis is a product of an even deeper political crisis. Had it not been the adoption of the 1978 Constitution, the country would not have reached this bleak point. The 1978 Constitution brought about a gradual breakdown of the functioning of all major public institutions. The ludicrous notion that one person could make all the decisions that are needed for every area, which is the most deeply embedded concept in the 1978 Constitution, has brought about a situation where the decision making capacity of public institutions has been seriously suppressed. A senior Indian journalist in a televised interview compared the situation in Sri Lanka to what happened in China when Chairman Mao Zedong ordered all the sparrows to be killed in order to get over the problem of the damage done by these birds to agricultural products. The result was the emergence of other pests through the loss of the natural avian by which the control of insects was done. The problem was so grave that China had to ask for imports of sparrows from Russia. What that demonstrated was the danger of leaving decision making in the hands of a single person.

Decision making processes are usually done through elaborate mechanisms within public institutions that are engaged in dealing with various problems. For example, the management of matters relating to money is done through highly sophisticated rational processes managed by persons who are trained in these fields and have acquired experience over a long period of time. What the 1978 Constitution did was to displace the effective management of these processes. Relevant public institutions remained but their actual power was taken away and exercised by the Executive President. The title Executive President was in fact a misnomer; going by the substance of the powers and the lack of control over that power, the better term would have been the Dictator.

However, the issue now is how to get rid of this Constitution that violates the norms of a rational Constitution in order to fight the grave economic crisis. Doing away with the 1978 model of the Constitution is not a mere legal exercise but part of an overall strategy to deal with the severe economic problems.

In that backdrop, there is a discussion about the displacement of the 1978 Constitution, on what is to replace it and how to bring about this change.

The entirety of the 1978 Constitutional model should be abolished and a Constitution that is based on principles that are opposed to that of the 1978 one should replace it. The replacement Constitution should be able to provide for the operation of the basic notions of democracy, the rule of law and the supremacy of the law. Nobody should be placed above the law. It means that the powers of the Legislature and the Executive, which have been diminished, should be revived and it should be held together by the principle that the three branches have equal power within the State. By operating on these principles, public institutions should be brought back to life with the necessary independence so that they could effectively manage the country’s economic establishment as well as all other areas of national life. By the combination of granting the necessary independence combined with checks and balances, these institutions would manage the country irrespective of whatever regime changes that may take place from time to time. That briefly is a vision for the basic structure of a Constitution that could provide a kind of State structure that could pull the country out of the economic mess.

The next question would be how to bring about this Constitution. The 1972 and 1978 Constitutions were made to suit the needs of a particular regime in power. Both these regimes had over two thirds majorities in Parliament and they had no difficulty in getting anything past through Parliament without considering the possible bad consequences of the laws that they were passing. A new Constitution should not be made in this manner. It should be made with the full participation of the people; this is not an exceptional situation anymore. Successful Constitutions in recent times have been made through Constitutional conventions and not by a government in power. One of the reasons for the strength of the Indian Constitution was that it was created through a long process of nationwide participation. As a result, vital questions that affected the country were addressed within the framework of Constitutional law and a foundation was laid for resolving the problems. The South African Constitution and the Nepalese Constitution are also examples of this type. Another inspiring example comes from Chile where, in the midst of a national crisis, people demanded not just a change of the regime but also a change of the Constitution. The people insisted that the Constitution must be made by a Constitutional convention where there would be a representation of all sectors of society and the entire nation would participate in the process of the debate.

After Gotabaya, the deluge?

Police brutality and corruption: the rot starts at the top

The many ways of helping Sri Lanka

Can Sri Lanka be stabilized over the short-term?

Will economy cause Sri Lankan President to trip?