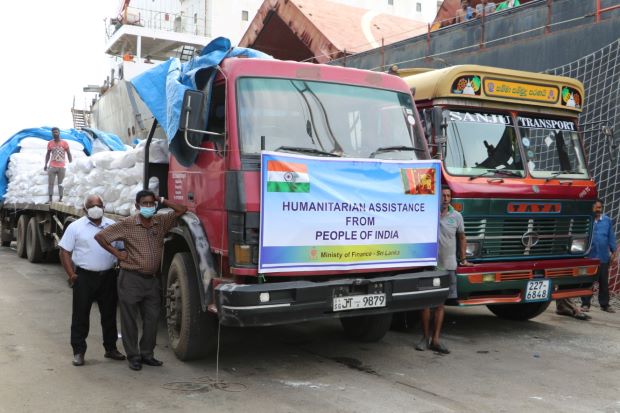 A critical shortage of foreign currency has left Sri Lanka unable to pay for enough imported food, fuel and medicines to meet demand since the end of last year, causing widespread hardship.

Its 22 million people have also been forced to endure prolonged daily blackouts and galloping inflation that has strained household budgets.

India has extended $1.5 billion in credit lines to allow Sri Lanka to keep meeting a portion of its food and energy needs, and Friday’s shipment followed a visit by Indian experts for aid talks.

“Both parties discussed at length the future course of action of the Indian aid program to stabilize and revive the Sri Lankan economy,” Sri Lankan President Gotabaya Rajapaksa’s office said after the meeting.

A statement from the Indian High Commission in Sri Lanka said Friday’s consignment was valued at Sri Lanka Rs 3 billion and consisted of 14,700 MT of rice, 250 MT of milk powder and 38 MT of medicines donated by the people of India.

It is the second consignment under a larger commitment of 40,000 MT of rice, 500 MT of milk powder and medicines by Government of Tamil Nadu, the statement added.

An acute lack of petrol has immobilized Sri Lanka this week, with Parliament cancelling two days of sittings to help conserve fuel.

The United Nations last week appealed for emergency food aid after a survey showed that four out of five Sri Lankans were skipping meals to cope with the crisis.

A US Treasury delegation is expected in the capital Colombo next week to assess the crisis, with Prime Minister Ranil Wickremesinghe telling lawmakers Wednesday that the nation’s economy had reached the point of “complete collapse”.

Sri Lanka has already defaulted on its $51 billion foreign debt and is in bailout talks with the International Monetary Fund, which could take months.