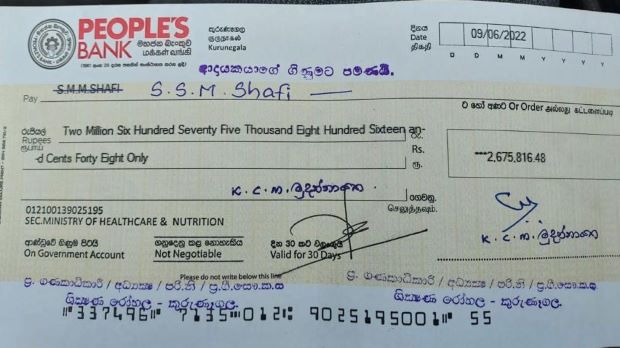 COLOMBO – A Sri Lankan Muslim doctor sent on compulsory leave for 36 months with no salary, after being falsely accused of performing sterilization operations on Sinhalese women in the wake of the 2019 Easter bombings,  is planning to use his salary arrears to purchase and donate lifesaving drugs as the country’s economic crisis threatens to leave patients untreated.

Dr Shafi Sihabdeen said on Monday (13) that he was in discussion with various companies to obtain a list of essential drugs named by the Ministry of Health, and hoped to finalize the donation by next week.

“I want to give a good message that we will never ever go forward with racism. I don’t have any personal agenda. This is a genuine gesture on my part, and a blow to racism,” he said.

The health ministry on Friday (10) issued a cheque for over Rs 2.67 million as payment of arrears to Dr Sihabdeen, following an earlier agreement to settle the overdue wages before July 10.

The arrears paid include the basic salary, interim allowance, cost of living, and allowance in lieu of pension for the period of compulsory leave imposed.

Dr. Sihabdeen was sent on compulsory leave upon being arrested over unproven accusations of performing a large number of sterilization operations at the Kurunegala Teaching hospital without the consent or knowledge of the patients.

He was also accused of having amassed wealth in an illegal manner and maintaining links with a terrorist organization.

However, the Criminal Investigation Department informed the Kurunegala Magistrate’s Court in July 2019 that none of the allegations raised against Dr. Sihabdeen could be proved. He was released on bail by the Kurunegala Chief Magistrate, and the health ministry was ordered to pay his salary arrears and reinstate him to the position he held at the hospital.

Dr Sihabdeen said though his salary arrears have been settled, he is yet to be reinstated to his position.

“I still have to be reinstated. We will see in the future how to give my service to society.”

Dr Sihabdeen is one of the better known cases of racial injustice in the wave of anti-Muslim violence that engulfed Sri Lanka in 2019, following the Easter attacks. A well regarded doctor, Dr Sihabdeen was accused of trying to curb the majority Sinhala Buddhist population.

He was vilified by Sri Lankan politicians and media, and the angered Sinhala Buddhist majority were sent on the warpath against him and his family with no evidence to his supposed crimes or connection to terror organizations.

Various misinformation regarding Sihabdeen’s family background, qualifications, even his son’s school admission spread through the country, and he and his family had to relocate from their home in Kurunegala due to the very real danger of being lynched by angry mobs.

“My wife had to face so many problems. She needed money for lawyers; the media was hounding her; and she needed to continue working. My kids had no education. They couldn’t get admission to schools.

“My wife faced more troubles than I did.”

Dr. Sihabdeen said that after all the trauma he, his wife and three children had to suffer, they are now doing “very well.” His wife is working at the Kandy Hospital, and his three children are studying in Kandy schools.

The fact remains that Dr Sihabdeen who was once “worshipped even by the Sinhalese patients” and “loved even by the majority” was used as a scapegoat and turned public enemy almost overnight, thanks in large put to a damaging and unsubstantiated story that appeared in a Sinhala language daily newspaper at a time when anti-Muslim sentiments was rife.

Dr Sihabdeen hopes his contribution will help people to realize the importance of banding together.

“My message to society is that we have to say no to this racism. We need to come together as Sri Lankans.”

Australia’s Kane Richardson out of Sri Lanka series with injury