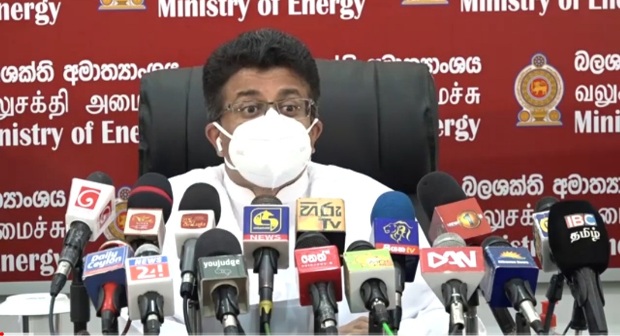 COLOMBO – Sri Lanka’s ruling party in a dramatic move called for the resignation of the Minister of Energy,  Udaya Gammanpila, a day after fuel prices were raised ending an election promise to fix oil prices, in a bid to bolster the cash-strapped State energy firm.

Minister Gammanpila said on Friday (11) the price hike was decided by a cabinet subcommittee as the State-run Ceylon Petroleum Corporation (CPC) had Rs 330 billion of accumulated losses and over US$ 3 billion in foreign exchange which was in short supply.

But General Secretary of the ruling Sri Lanka Podujana Party (SLPP), Sagara Kariyawasam, issued a statement charging Gammanpila of conspiring to bring the government’s leaders to disrepute by increasing fuel prices and calling for his resignation.

“Our utmost displeasure and concern with regard to the fuel price hike which has caused an added burden on the public at this difficult time of the COVID-19 pandemic,” the party said in a tweet, demanding the minister in charge should take full responsibility and step down.

Kariyawasam in a statement said it was the view of the party that additional burdens must not be placed on the public who was already suffering from a coronavirus pandemic.

It is unusual for a ruling party to call for the resignation of a petroleum minister over a price hike. However, there had been simmering tensions between Kariyawasam and Gammanpila, with the latter going on record referring to a benign “internal struggle” to course correct the alliance and reverse some of its more problematic decisions.

On April 4, 2021, the minister said there was a conspiracy afoot to undermine President Gotabaya Rajapaksa’s administration and destroy the alliance from within.

In his June 12 statement, Kariyawasam alluded to attempts to deliberately sabotage the government to make the party leadership unpopular in the eyes of the public.

There have been tensions between Weerawansa and sections of the SLPP since early February when he refused to retract a remark he had made to a Sinhala-langue weekly on February 7 that President Rajapaksa must lead the SLPP.

His comment drew the ire of Kariyawasam who demanded an apology and a retraction from his colleague.

Previously, on February 2, the SLPP secretary criticized Weerawansa for going public with his party’s opposition to the now-scrapped East Container Terminal deal. His actions, Kariyawasam said, were detrimental to the unity within the ruling coalition.