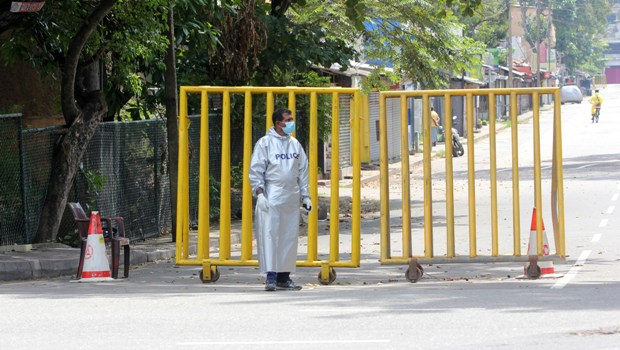 COLOMBO – Sri Lanka on Wednesday (12) announced an island-wide ‘movement restrictions’ from 11:00 p.m. Thursday (13) till 4:00 a.m. Monday (17), in what amounted to a de facto curfew. However, Army Commander Gen Shavendra Silva maintained the movement restrictions was just that and not a curfew.

A slew of seemingly contradictory statements about restrictions afternoon led to much confusion, even as the government continued to urge the public to stay at home to contain a dramatic surge in COVID-19 cases.

A statement from the Government Department of Information said two types of travel restrictions have been imposed effective Wednesday (12) to control COVID-19 spread in the country and quoted Gen Silva, who also heads National Operations Centre for Prevention of COVID-19 outbreak, as saying travel restrictions will be imposed from 11.00 p.m. to 4.00 a.m. daily with effect from Wednesday (12) until Monday, (3). In addition, it said, island-wide travel restrictions will be in force from 11.00 p.m. Thursday to 4:00 a.m. Monday. It also said there would be no impediment to the transportation of essential goods and food items during ‘movement restriction’ period.

Reports also quoted Gen Silva as saying the vaccination program in the Western Province will continue despite the travel restrictions.

Meanwhile, the Ministry of Health issued amended guidelines on restrictions for permitted functions, which, effective Wednesday, allows only one person per family to leave the house on a given day based on the last digit of the National Identity Card (NIC) number. Exceptions have been provided for purposes of work and for obtaining health services.

The guidelines, which are effective until May 31, also specifies public transportation only with seated passengers and limits passengers in private taxi services, including three-wheelers, to a maximum of two.  Other types of vehicles are permitted to transport seated passengers only.

Government and private sector offices, and essential services have been permitted to operate with a minimum number of staff, with working from home encouraged for others.  Essential meetings have been permitted with a maximum of 10 members belonging to the same institution.

Financial institutions such as banks have been permitted to operate with a maximum of 25% capacity of the total number of customers that could be accommodated within the available space, as have clothing and textile shops, grocery stores, open markets, fairs, economic centres and supermarkets. The public have been instructed to maintain a distance of 1.5 meters walking space within each other.

Wine stores have been permitted to function from 10:00 a.m. to 6:00 p.m., while weddings have been prohibited until further notice, though registrations can be conducted with immediate family members with up to a maximum number of 15 participants.

The guidelines specify funerals should be held within 24-hours after acquiring the body of the deceased, taking all possible precautions to minimize the number attending to a maximum of 15 people at a given time adhering to health guidelines.

The gathering of people at places of worship has also been banned until further notice, though walking paths will remain open only to walk by self with crowding permitted.