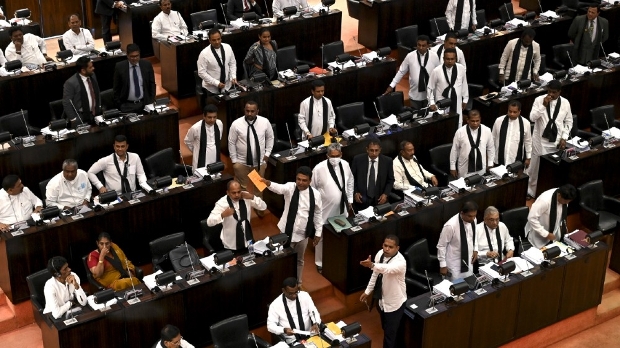 COLOMBO– Sri Lanka’s opposition parties have hit out at the government for its handling of the resolution passed at the 46th session of the United Nations Human Rights Council (UNHRC) in Geneva on Tuesday (23).

The main opposition Samagi Jana Balawegaya (SJB) said the outcome was the direct result of “major failures” on the part of the present government, while the Janatha Vimukthi Peramuna (JVP), expressing similar sentiments, said the UNHRC resolution was an indictment of the government’s domestic and foreign policy failures. The JVP laid particular emphasis on its observation that the resolution was not against the Sri Lankan states or its people. Views expressed by opposition parties and its members on Wednesday (24):

The SJB, in a statement issued on Wednesday, said the outcome in Geneva was brought about by the government’s foreign policy failure and its current failure in safeguarding human rights and democracy in Sri Lanka.

Elaborating on the alleged foreign policy failures, the SJB said that instead of embarking on a careful and thoughtful process of diplomatically convincing the world that Sri Lanka is willing to take its human rights obligations seriously, the government embarked on an obnoxious and intransigent campaign.

“The government lacks coherence, competence, and good faith in dealing with the international community. This dysfunctional approach to foreign relations is one of the main reasons countries that once supported Sri Lanka are now no longer its allies,” the party said, calling for a fresh approach with competent professionals guiding Sri Lanka’s foreign policy.

The SJB also attributed the UNHRC result to what the party called a rapid deterioration of the human rights situation in Sri Lanka. The party condemned the “racist, xenophobic, and discriminatory policies of the present government” and the “systematic assault on Sri Lanka’s democratic institutions”.

Sri Lanka’s main opposition party was also critical of alleged systematic targeting of critics of the government as well as opposition parties and the shrinking of space for dissent.

Pointing to the Lessons Learnt and Reconciliation Commission (LLRC) and the Paranagama Commission, both of which had called for investigations on certain violations that had occurred, the SJB said the government has promised “yet another new commission” rather than implement their recommendations.

“This inaction has directly led to increased international pressure on Sri Lanka,” it said.

In a separate statement, SJB parliamentarian Eran Wickramaratne called Tuesday’s events the lowest point in Sri Lanka’s foreign policy management since the end of the conflict in 2009. If the government fails to manage the UNHRC resolution properly, the economic consequences will be catastrophic, he warned.

“The present resolution is heavily weighted towards the correction of the infringements of human rights of the past 16 months over the issues pertaining to the military conflict that ended over a decade ago,” he said, charging that the government has impounded its policy failures by appointing the wrong persons for defined tasks. He called for a fresh appraisal to minimize the negative economic consequences of the resolution without risking legal battles in foreign jurisdictions, travel bans and trade embargos.

Echoing his party position, Wickramaratne called for domestic mechanisms that meet the concerns of the international community in order to arrive at the truth, coupled with a fresh diplomatic initiative.

“We in the opposition will support a progressive fresh initiative in the interest of all our people,” he said.

Former Speaker Karu Jayasuriya, meanwhile, called for unity, tweeting on Wednesday, “Now that Geneva’s decision is delivered, it’s time that we stand together, as a nation, solidly and unitedly. For the well-being of the people, the authorities must look at errors and omissions, if any. The country must rise as a truly democratic nation. We cannot stand alone.”

Rathnayake said much of the latest UNHRC resolution focuses on the government’s human rights record over the past one and a half years and spends little time on the events that transpired in the final phase of the war against the LTTE in 2009. The document, he said, highlights the weakening of the Human Rights Commission of Sri Lanka, the alleged deterioration of judicial independence, targeting of journalist and civil society activists, and the mandatory cremation of Muslims who succumbed to COVID-19.

“The resolution that was passed yesterday was not against the Sri Lankan State and will not directly impact the Atate. It has very little about the war in 2009,” said Rathnayake.

“There is nothing in the resolution against the people of Sri Lanka. But the government is trying to cover up their failure and is asking all patriots to unite against it,” he added.

Accusing the Rajapaksas of attempting to cover their quest for power with the national flag, Rathnayake said even the pro-Rajapaksa Buddhist monks who would otherwise have taken to the streets in protest of the UNHRC have remained mum about yesterday’s vote.

“Even these priests know they cannot stand together with this government. With all their rhetoric and talk of electric chairs, it is the Rajapaksas who have allowed Sri Lanka to be isolated in the world,” he said, noting that the number of countries that voted in favour of Sri Lanka has gradually dwindled to 11 from the 23 that had supported the country in Geneva 2009.

North Korea launches missile test as tensions rise with US