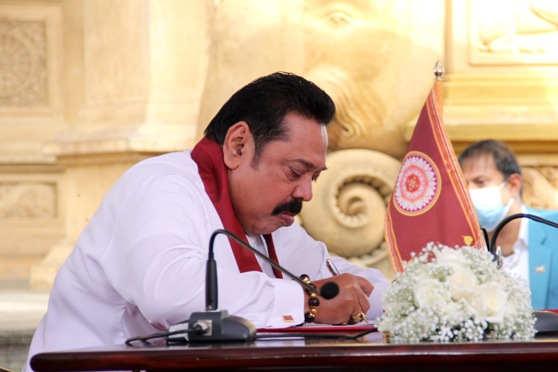 COLOMBO – Prime Minister Mahinda Rajapaksa has instructed the Criminal Investigations Department (CID) not to summon or question journalists who had reported on the recently uncovered garlic scam at Lanka Sathosa.

This follows reports that a team of CID officers had visited the office of the Lankadeepa newspaper in Colombo on Tuesday (28), to record statements from the editor and several journalists who had reported on the scam, and on claims made by the former director of the Consumer Affairs Authority (CAA), Thushan Gunawardena, about widespread malpractises in State-run concern.

Media Minister Dullas Alahapperuma, during the weekly post-Cabinet media briefing on Tuesday, acknowledged that the CID had summoned journalists and editors of several newspapers for questioning, and said the Prime Minister had instructed the officials not to summon or question journalists with regard to ongoing investigations into the scam.

He also extended an apology to the concerned journalists and editors and said Sarath Weerasekara, Minister of Public Security, had given an assurance that journalists will not be questioned.

Local media reports quoted unnamed sources as saying the  CID had summoned a number of journalists following complaints lodged by Trade Minister Bandula Gunawardena over several comments made by the former CAA director criticizing the minister over the garlic scam.

Earlier on Tuesday, a team of CID officers was reported to have visited the office of the Lankadeepa newspaper to record statements from the editor and several journalists who had covered the scam, and the allegations levelled by the former CAA director on malpractices at the State-owned Lanka Sathosa.

However, the CID officers had left the premises when the editor had refused to record a statement, instructing the parties concerned to report to the Department on another day.

Four officials of Lanka Sathosa were suspended after they were found to be involved in selling imported garlic for a lesser price to third-party sellers.

The fraud was detected due to a tip-off by an employee of Lanka Sathosa, who had noticed false entries in the institution’s logbook used to clear containers of imported essential items.