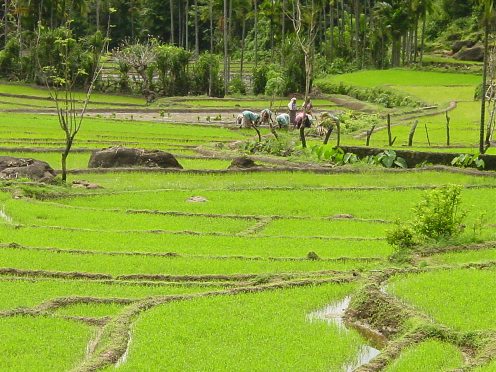 COLOMBO – When the British ruled Sri Lanka, peasant agriculture, with paddy as the main crop, was systematically destroyed to yield place to plantation-based commercial agriculture monopolized by them. Sri Lankan peasant agriculture is yet to recover from the historical neglect as the island nation continues to be dependent on food imports to fill vital gaps in supply.

In 2018, for example, the import of grains, milk, and a variety of food items of common consumption accounted for 7.2% of the total imports with the foreign exchange outgo being US$ 1.6 billion.

The slant against peasant agriculture directly and quickly led to the impoverishment of the indigenous peasantry even as British planters, civil servants and even governors made fortunes out of investments in the burgeoning plantation sector.

Though by the beginning of the 19th Century, when the British took over the island from the Dutch and laissez-faire was accepted as the ideal in Europe, the British in Ceylon were against the introduction of free trade on the plea that the civilization here had “not reached a high level of development,” and what the people needed was “good, stout despotism”. This theory was used to brazenly deny welfare and make exploitation of local human and natural resources for the exclusive benefit of the British. Concomitantly, collection of revenue rather than economic development of the indigenous population became the principal aim of the colonial regime.

Decisions taken in Colombo and London on land, taxation, labour and monopolies were, in essence, a throwback to the “old and inveterate system of oppression” that characterized Dutch and Portuguese rule in the island, says Prof. P. V. J. Jayasekera in his book: Confrontations with Colonialism, 1796-1920 Vol I.

Right from 1796 to 98, the British authorities in London had set revenue targets for Ceylon. There was hardly any interest in rendering services to the people from whom the surpluses were exacted. Road building was a major activity in the 19th century, but it was not undertaken to benefit the locals, only to serve British commercial interests centred on a burgeoning plantation economy.

Irrigation, which had been provided by the native kings with the help of free Rajakariya labour, was neglected for the sake of road construction to serve British military and economic needs (principally the needs of the plantation sector).

When Governor Henry Ward arrived in 1855, he was bombarded with petitions to provide irrigation. While he realized the need for irrigation, the British planters who did not want peasant agriculture to grow and export, scuttled his bid for reform.

Earlier in 1849, the government had offered to give funds for irrigation development but these had to be paid back with interest in addition to providing free labour for the government’s public enterprises which were mostly infrastructure work for the benefit of British interests.

Prof. Jayasekera points out that in the traditional administrative system, the emphasis was on the maintenance and improvement of agriculture and irrigation and not just surplus extraction. The British justified their control over land saying they were only following a tradition in which the Kings had over-lordship over land as Bhupathis or Pruthivirajas. Under Rajakariya, the king granted land to peasants in exchange for services.  The services expected were for public works like irrigation facilities.  Special services were elicited on the basis of a person’s caste-related occupation. But the British disallowed any assertion of customary use of, and title over, land. Jayasekera points out that this was totally against the 1815 Kandyan Convention the British had entered into with the Kandyan chiefs. The document had explicitly stated that the people’s customary rights would be protected by the new British rulers.

In 1801, Ceylon’s first British Governor, Fredrick North, reasserted the governments’ right to both categories of Rajakiriya services but he introduced a direct tax on the produce of the land. The peasantry resented this. While under the Kings Rajakariya labour was used for irrigation works, the British used the system for their military needs and commercial agriculture. With the result, rice production declined to 50% of the requirement, and imports increased three-fold, Prof. Jayasekera says.

“The precarious of returns in agriculture led to peasants going in for share-cropping, giving half the produce to the landowners. Land was being mortgaged at 25 to 50% interest,” he points out.

The British monopoly of cinnamon production and sale (until it was abolished) had deprived the peasant of a lucrative market in the West. Duties were imposed solely to benefit the British. Duties on imported British goods were slashed by 50%. Rice and cloth imported from India, which were used by the masses were taxed 8 to 12 %. Export duties on tobacco and areca nuts deprived the Ceylonese peasant of the large Indian market. To promote British shipping, goods brought by non-British ships were taxed 50% extra.

Free land was given to Europeans and Burghers for the cultivation of commercial crops like coffee, cotton, indigo and sugarcane. Tax exemption was given for 5 to 10 years for these enterprises. Their work force was also exempted from Rajakariya obligations. With the plantations becoming money spinners, planters and civil servants propagated the notion that paddy cultivation was a waste and did not deserve government encouragement, and the governors agreed.

One of the reasons why the plantation economy boomed was that the British bureaucracy was part of it as investors. Even governors invested in the plantations. When a legislature was set up, planters and British merchants were represented significantly. Planters’ interests were also strongly represented in the British government. According to Prof. Jayasekera the 19th Century colonial State in Ceylon was more powerful than it was in India because of the dominance of the British-controlled plantation economy in the island.

The ‘draconian’ Land Ordinance 5 of 1840 was based on the theory that all land belonged to the Crown unless they had been granted to someone earlier. This opened the floodgates to land grabbers and planters, a motley crowd of Whites including civil servants and governors. Unauthorized local holders of land were sent to jail or fined. This was one of the causes of the 1848 rebellion, which had to be put down with the use of brute force. A parliamentary committee went into the causes of the 1848 uprising but it made no difference.

Although it was acknowledged that peasant-cultivated coffee was of good quality, the British favoured giving coffee cultivation to large British-owned plantations, which could mint money using cheap and servile labour imported from the Madras Presidency in India.

In view of the importance of using a captive labour force in their plantations, the British discouraged peasant agricultural development by denying the latter improved irrigation and the protections they traditionally enjoyed under the rule of the kings. This was also meant to release peasants from their land for employment in the plantations. In addition, there was compulsory service which was used to clear land for the plantations and for road laying.

In 1832, compulsory service was abolished except for road construction. However, a Hut Tax was introduced in early 20th Century by Governor McCullum. Under this, the Sinhalese peasant had to send at least one member of his family for work in a plantation, if he was to be exempted from the Hut tax. Even so, the Sinhalese refused to work for the low wages in the plantation sector.

However, use of Sinhalese labour ceased when cheap Tamil labour from the famine-stricken districts of Madras Presidency was available in abundance. The British-governed Madras collaborated by neglecting agriculture and forcing peasants to go to the colonies to work in British plantations