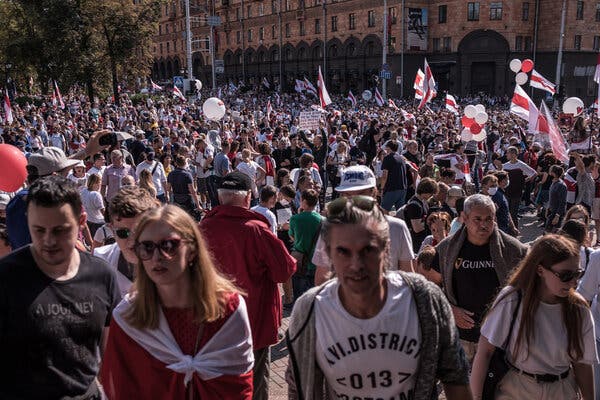 WARSAW — Stepan Svetlov’s computer sits on a desk in Warsaw, nearly 300 miles from Minsk, the capital of Belarus. But when Belarusians poured into the streets in the hours and days after President Alexander Lukashenko fraudulently claimed a reelection victory August 9, it was thanks in no small part to Svetlov, 22, and his computer.

Internet access was often blocked that week, leading opposition activists were in custody or in hiding, and independent media has long been heavily restricted in Belarus. But Belarusians were kept informed and even directed by an account run by Svetlov on one of the few social media platforms — Telegram — that had managed to maintain sporadic service during the internet outage.

From across the border, Svetlov and his team of five pumped out information about voter fraud and police violence — as well as tips about where, when, and how to protest, evade police, defend against police beatings, treat exposure to tear gas, and locate medicine and safe houses.

“Take to the streets,” Svetlov and his team wrote after preliminary results were announced August 9, “and defend your votes!”

A soft-spoken, fresh-faced film-school graduate who works from a cramped and gloomy office in central Warsaw, Svetlov does not initially seem like the standard-bearer for a revolution. But Nexta — his Telegram feed, named for the Belarusian word for “someone” — has nevertheless become a kind of Radio Free Europe for the internet age. At the time of the election, the feed had several hundred thousand subscribers, a number that has since risen to more than 2 million.

“Stepan is undoubtedly one of the most significant figures in the events taking place,” said Anton Shpak, 47, an illustrator who joined protests after viewing evidence of police brutality published by Nexta.

In the immediate aftermath of the election, Nexta was “first of all, a source of information,” Shpak added. “And, to some extent, it was a source of inspiration.”

The protesters themselves are the key to ground-level mobilization and change. During the Arab uprisings of 2011, external observers were sometimes too quick to present social media as the primary driver of unrest, instead of merely an accelerator of its spread. Though proud of his role, Svetlov is wary of making similar claims today.

“It’s the people who are initiating this whole process against Lukashenko and the regime,” Svetlov said in an interview Wednesday afternoon in Warsaw. “We are just helping them to achieve this.”

Yet in truth, Svetlov and Nexta are more than just a vessel for other people’s dreams. In the days before the election, Nexta issued detailed instructions for how government critics should organize and protest on polling day.

To ensure unity between protesters, the Nexta team coordinated these plans in private with members of rival Telegram feeds and leading activists, Svetlov said.

“There is quite a cooperation going on with other Telegram channels, to try to have the same message,” Svetlov said. “It’s happening on a constant basis, day and night.”

Having reached a consensus, Nexta’s staff members published times and places for protesters to meet. They suggested routes that protesters could use to reach particular gathering points and proposed alternatives in case those routes were blocked. They offered advice on how to obstruct police vehicles and instructed protesters to remain peaceful.

In the hours after the polls closed, they also called for a general strike, explained how protesters could help people evade arrest, and suggested buying helmets, goggles, gas masks, and shields to guard against police violence.

And by disseminating this information on Telegram, they introduced a means by which Belarusians could continue to stay informed during the internet shutdown.

Telegram was practical: A cross between a microblogging service like Twitter and a messaging service like WhatsApp, Telegram allows users to send the same message to millions of followers at once.

Crucially, it was also accessible. Founded by two self-exiled Russian brothers, Pavel and Nikolai Durov, Telegram’s design allows it to disguise the source of its traffic. Last month, that made it harder for the Belarusian government to locate and block traffic on Telegram than on higher-profile platforms like Twitter or Facebook.

“Telegram does turn out to be more effective in a protest scenario,” said Alp Toker, director of NetBlocks, a British-based internet observatory that researched the Belarus internet outages.

“It’s a shift away from the use of social media platforms like Twitter in the revolutions that we’ve seen before,” Toker said.

Svetlov was a relatively late convert to Telegram.

Born in 1998 as Stsiapan Putsila, Svetlov’s first medium of choice was his school newspaper, which he edited in 2013. His father is a sports journalist and his mother a teacher, and they sent him to study at the Belarusian Humanities Lyceum, a legendary dissident school. The lyceum was technically banned in 2003 but tacitly allowed to operate in semi-secrecy on the outskirts of Minsk.

It was there that Svetlov developed his independent streak, said Franak Viacorka, a prominent analyst and journalist, and one of several opposition activists and writers who also studied at the school.

“The school is the beginning of everything,” Viacorka said. “The school became the symbol of youth resistance to Lukashenko.”

Svetlov moved to Poland in 2015 to study film production. He initially founded Nexta as a YouTube channel to disseminate satirical music videos about Belarusian politics. But later he started making documentaries, including an hourlong film about Lukashenko.

That drew the attention of the Lukashenko regime, whose proxies complained to YouTube that Svetlov’s films broke copyright law because they reused certain archive footage. While YouTube investigated the claim, they blocked access to his work — prompting Svetlov to pivot to Telegram in 2018. The same year, Belarusian authorities began legal proceedings against him for “insulting the president,” forcing him to stay in Poland as a political exile (he was recently granted formal refugee status).

Over the next two years, his Telegram channel kept growing in popularity, particularly after it became a go-to repository for disaffected state officials seeking to leak compromising material about government malpractice, like the mysterious death of a traffic policeman.

Nexta’s huge readership gives it enormous reach, but it also constitutes a ready-made pool of sources, all of whom can collectively provide a steady stream of content and information.

By the time of the election last month, it was the leading Telegram channel for Belarusian politics, a feed that provided more than a million people with a rare uncensored picture of life inside Belarus. According to Viacorka, its success is partly the result of Svetlov’s own skill, partly its strident tone — and also luck.

“He’s super talented,” Viacorka said. “But he was also in the right place at the right time.”

On Wednesday (02), Protasevich sat at his computer screen, scrolling through hundreds of photos and videos that had been sent privately by Nexta’s readers for possible inclusion on the feed. Protasevich’s task was to verify the footage, a job that was quite easy that afternoon, he said because there were so many sources sending in different images of the same incidents.

Within a few minutes, he had selected some of the most captivating footage, overlaid it with a Nexta watermark and then published it on Nexta’s live feed with a brief caption.

Sometimes, this process goes awry. The team has wrongly claimed that Russian security forces were involved in suppressing protests. And they claimed a protester died when in fact he had survived.

They corrected the errors, and they say they have a rigorous approach to fact-checking. But they also admit that their work is sometimes hasty. And they acknowledge it blurs the boundary between journalism and activism, particularly now that so many activists inside Belarus have been arrested, creating a leadership vacuum that the Nexta team sometimes feels obliged to fill.

“We’re journalists, but we also have to do something else,” Protasevich said. “No one else is left. The opposition leaders are in prison.”

Regime supporters have accused Svetlov and his channel of being funded or directed by the West. But Svetlov said their income is derived entirely from advertising on Telegram and YouTube, and that costs are kept low because they are allowed to use their office rent-free by the Belarusian community center that runs the building.

Svetlov’s family members have paid a heavy price for his work. His mother and father were harassed at home by police after he refused to return to Belarus, and eventually they, too, fled to Poland, fearing for their safety. And recent bomb threats to the community center, which now has two policemen guarding its door, serve as a reminder that the family is still not completely secure, even in Poland.

Despite the constant stress, Svetlov said that he is sustained by the virtue of the task at hand.

“For us, the most important thing is that we help establish democracy in our country,” he said. “And that we can return back to the country that we’re from.”