The fallen Sri Lankan rupee: Not just another economic crisis 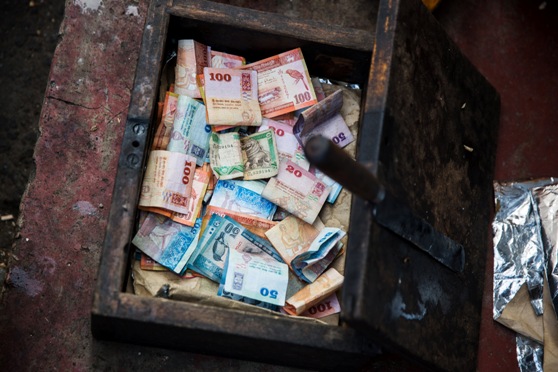 By Namrata Yadav and Vinod Rai

In February this year, Sri Lanka’s reserves were at US$ 2.03 billion. They hit a new low of US$ 1.73 billion in March 2022 as the crisis began unfurling. The Sri Lankan Rupee (SLR) remains deeply depreciated at SLR1 equivalent to US$ 0.0031. Given these macroeconomic realities, a delegation from Sri Lanka is in the midst of negotiating a bailout from the IMF for US$ 3 billion. However, questions remain as to how the growing current account deficit, depreciating reserves and inflation went undealt for the crisis to arise. The leadership has pinned the crisis on the COVID-19 pandemic and previous administration. However, fact remains there were systemic wrongs in the fiscal and monetary policy of the state which were made worse by the current government’s policies. This insight aims to understand the weaknesses in Sri Lanka’s fiscal plan, its negotiations with the International Monetary Fund (IMF) and the challenges that lie ahead in rebuilding the economy.

On April 12, 2022, the Sri Lankan government announced a soft default; it will be defaulting on its debt of US$ 51 billion in the interim. As of the third week of April 2022, a delegation led by Finance Minister Ali Sabry is in negotiations with the IMF for a ‘Rapid Financing Instrument’. However, these talks are still at a preliminary level.

Meanwhile, protests continue in Colombo. People in Sri Lanka are protesting in light of the adverse economic conditions as the country’s foreign reserves plummeted to US$1.93 billion in March 2022. Consequentially, food inflation rose to 30.7% in March 2022. On March 24, 2022, the country’s second largest gas supplier, Laugfs Gas, raised prices for a 12.5kg cylinder to SLR 4,199 from the earlier SLR 2,675. Last month, the country ran out of essential medicines and had to suspend all medical surgeries. Furthermore, the country must repay US$ 7 billion of foreign debt due later this year.

President Gotabaya Rajapaksa has defended his administration, claiming that the current crisis is a product of COVID-19, which has affected tourism, revenue and inward remittances. Experts, on the other hand, have termed the crisis as an “economic mismanagement by successive governments that amassed huge budget shortfalls and a current account deficit.” Meanwhile, Sri Lanka seems to have also entered a political crisis. In the face of on-going protests, the entire cabinet, apart for Prime Minister Mahinda Rajapaksa, resigned. Gotabaya then put in place an interim cabinet, which has been harshly criticized by Sri Lankans. On April 19, in response to the continuing protests, the prime minister proposed to curb the president’s executive powers.

How did Sri Lanka get here?

Sri Lanka is an export-oriented economy, with exports accounting for almost 23% of its gross domestic product (GDP). However, unlike other export-oriented developing economies, the country has not been able to diversify its exports, and its portfolio of exports have remained limited to agricultural produce and garments. Sri Lanka, primarily remains an import-dependent country. Since 2012, the country has run a growing current account deficit. This was the first red flag for the current crisis.

Meanwhile, Sri Lanka’s economic growth rate has gradually fallen over time, from 7% in 2015 to 2% in 2019. Taxes, as a source of government revenue, have been declining for almost two decades. Presently, the taxes are as low as 9.2% of the GDP. This was the second red flag for the current crisis. Tax concessions and government subsidies have been a consistent policy measure under all Sri Lankan governments. As a result, the nation has also been running a budget deficit for years. In 2021, the deficit reached a peak of 10.51% of the GDP. This revenue shortfall has been supplemented with increased government borrowing. Sri Lanka’s debt-to-GDP ratio has been rising over the years. Currently, it stands at 104%. Thus, the majority of government revenue has been used for debt repayments.

Notwithstanding the dual deficit, Sri Lanka continued with debt-financed infrastructural investment and borrowing from the Central Bank of Sri Lanka (CBSL) to clear these debts. Essentially, the country’s growth has been two pillared – government expenditure fed domestic consumption and large debt-financed infrastructure projects. However, poor economic planning, failing trade policy and mounting debt are not the reasons alone for the present crisis. Notably, Sri Lanka has a history of IMF bailouts. The pattern of borrowing and running dual deficits that has gone unchanged in subsequent governments helps to explain Sri Lanka’s financial predicament. Evidently, there must be more red flags for the current crisis.

Sri Lanka’s leadership is a unique one. The Rajapaksa family holds most of the leadership and cabinet positions, making accusations of corruption inevitable. By 2015, Sri Lanka’s external debt had grown by 25% with no new large-scale infrastructure projects. During the 2016 IMF bailout, it was revealed that state-owned enterprises in the country were used to take out additional loans on behalf of the government. The domestic economy has been under continuous strain, which became evident again during the 2018 constitutional crisis. Leadership induced political instability caused a loss in tourism revenue, currency depreciation and loss of investor confidence in the country. Foreign reserves were hit once again. By the end of the political episode, Sri Lanka’s foreign reserves declined to US$ 6.9 billion from US$ 7.5 billion in 2017. Tourism in Sri Lanka amounted to US$4.4 billion in 2019. However, the April 2019 Easter attack led to an 18% decline in incoming tourists. The COVID-19 pandemic worsened this.

The 2019 elections that brought Gotabaya to power promised a better economy to the people. However, short-sighted tax exemptions, faulty domestic policies and the pandemic adversely impacted the situation. Sri Lanka’s economic health suffered severely during the pandemic, with the country losing more than US$ 3 billion in the first eight months of 2021 due to a decline in tourism revenue. When Gotabaya assumed presidential power in November 2019, Sri Lanka was US$ 34.4 billion in debt. He further worsened the budget deficit by slashing value-added tax to eight per cent, eliminating seven other taxes and distributing relief packages. Though he intended to boost economic growth, the new tax regime began eating off necessary revenue. It led to the old repetitive pattern of increased government borrowing from the CBSL.

The borrowing from the CBSL intensified after April 2021 due to Gotabaya’s failed policy of ‘organic drive’. His ban on the import of synthetic fertilizers and pesticides resulted in a decline of crops. Rice production plummeted by 20%, and Sri Lanka was forced to import rice worth US$ 450 million to meet its immediate needs. Tea, which comprises 17% of Sri Lanka’s exports, suffered as well. Government policies have snowballed into an endless money pit which was being supplied by the CBSL to make ends meet. Between August 2021 and March 2022, the CBSL supplied an unprecedented US$ 1,800 million for the import of essential items,  How did these mistakes go unchecked for so long? The answers lie in the poor governance and centralized domestic structures of the country.

Interestingly, a March 2022 report by the CBSL assessed that a substantial part of the economic crisis was due to the COVID-19 pandemic; inflation was caused by the Russia-Ukraine war; and debt amassed by the previous regimes. However, the domestic institutional structures of Sri Lanka offer a better explanation. The CBSL, though a financial adviser of the state, has little to no autonomy as its appointments are made by the government. Similarly, the 20th constitutional amendment enacted after the 2019 elections bestowed considerable executive powers on the president. These included the power to appoint people directly to government offices and to surpass cabinet decisions. As a result, decisions in Sri Lanka have not been devoid of political affiliation. The current crisis thus does not have mere economic undertones alone. As Mahinda moves to curb executive powers and introduce broader constitutional reform, it is clear that Sri Lanka has entered into an era of political uncertainty. The opposition is fragmented and wary of taking responsibility in the middle of a debilitating crisis.

What we see in Sri Lanka today is not a situation created by a single misguided policy. It is a crisis caused by policies gone wrong at the hands of populist jibes by consecutive governments. Tax concessions offered as pleasantries to garner support and poorly regulated monetary policy have ballooned to a lasting budget deficit.

Currently, Sri Lanka needs US$ 20 billion for the import of essential items such as fuel, food and intermediate material to initiate exports. In light of this, the government declared on April 12, 2022 that it will seek an IMF bail-out and repay all its pending debt of US$25 billion after completing a restructuring programme with the IMF. At this point, the IMF has clarified that the ‘debt sustainability’ of Sri Lanka is imperative to any arrangement. At the same time, Sabry’s recent statements hint that Sri Lanka is aiming to avoid a hard default rather than solving the debt problem in the long run. The government is seeking a US$ 3 billion loan from the IMF to restore supply chains and essential items to the country. However, the reality remains that Sri Lanka needs a long-term strategy to fend off this economic crisis and avoid repeating old patterns of borrowing and defaulting.

The IMF’s involvement will be accompanied with stringent economic conditions for Sri Lanka. Increasing taxes, controlling expenditure and debt restructuring, are some of the few expected immediate actions by the IMF. Simultaneously, the country has also approached the World Bank for assistance. The next few months will be challenging for Sri Lanka, both economically and politically. Intervention by the IMF may lead to increased unrest among the populace who are already weary of high prices. As Sri Lanka has a large public sector employing 45% of its domestic workforce, the IMF may propose additional revisions such as privatization policies and deduction of subsidies, among other revenue increasing measures. To ease in these changes to the public, the Sri Lankan government must carefully mitigate the brewing political crisis.

Sri Lanka has managed to provide for essential items in the interim owing to good bilateral relations with its neighbours. China, Bangladesh and India have come to Sri Lanka’s aid in this time of crisis with currency swap arrangements, credit lines and food and fuel supplies. However, it is not just this state in South Asia that is going through economic difficulties.

While Sri Lanka’s current crisis has been in the making for a few years, the Russia-Ukraine conflict has also contributed to its woes. This impact can also be felt in Pakistan and Nepal. Currently, Pakistan faces declining foreign reserves affecting its purchasing power. Similarly, Nepal has adopted a restricted import strategy to ensure stability to its foreign reserves. These are indeed tough times for South Asia.

Namrata Yadav is a Research Analyst at the Institute of South Asian Studies (ISAS), an autonomous research institute at the National University of Singapore (NUS), that published this article initially. She can be contacted at Yadav28@nus.edu.sg. Vinod Rai is a Distinguished Visiting Research Fellow at the same institute. He is also a former Comptroller and Auditor General of India. He can be contacted at isasvr@nus.edu.sg