As Colombo sways away towards China again 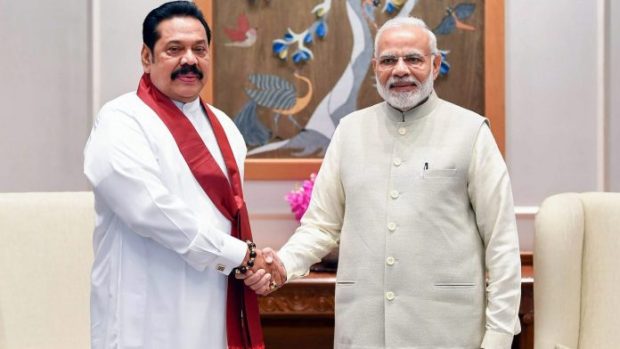 NEW DELHI –   India is looking at a ‘recalibration’ of its bilateral ties with Sri Lanka as China is gaining massive inroads in the Indian Ocean island nation, multiple sources have told ThePrint.

New Delhi, which aimed at resetting bilateral ties with Colombo following the return of the Rajapaksa regime, now believes that Sri Lanka has taken a firm decision on ‘completely aligning’ with China even if that means doing away with the balancing act with India, sources said.

The bill was passed despite stiff resistance from opposition parties and concerns that the Colombo Port City could turn into a ‘Chinese province’ inside Sri Lanka.

The proposed new CPCEC is expected to have wide-ranging powers and the port city will not be subject to laws and regulations of the Municipal Council and Urban Development Authority of Sri Lanka, thereby raising concerns that it will not function democratically.

According to one source, with the port city coming up and coupled with what happened in the Hambantota Port (where there is speculation that Colombo is looking to extend the 99-year lease to Beijing), Sri Lanka has now “completely come under China’s control” and this will pose a challenge for all future governments there while posing a security threat to India.

Ties between India and Sri Lanka began plummeting in February when Colombo scrapped the strategically important East Container Terminal at Colombo port, which was a tripartite pact with Japan. It instead offered India the West Container Terminal (WCT) as a private deal unlike the previous government-to-government agreement.

It is now clear that the initial bonhomie between Indian Prime Minister Narendra Modi and the Rajapaksa brothers — President Gotabaya Rajapaksa and Prime Minister Mahinda Rajapaksa — and Sri Lanka’s adherence to an ‘India-first’ policy are now “fast fading away”, said another source.

This has happened because Beijing has “worked towards” drifting the island nation away from India so that it can maintain its presence in the Indian Ocean region as the Indo-Pacific strategic construct takes shape, sources said.

However, the sources said, India is now banking on the West Container Terminal, being developed by the Adani Group to make its “strategic presence” felt there.

“They (Adani Group) will remain invested there for a long time. Be it private or public, as long as India has a presence there where China is present in a big way, New Delhi is satisfied,” said a source who refused to be identified.

India to put more focus on Tamil cause

India is now planning to put greater focus on pushing ahead with the decades-old Sri Lankan Tamil cause by way of making the Rajapaksa government implement the 13th amendment to its constitution, which is aimed at facilitating the reconciliation of the Tamil minority by giving them greater representation, the sources quoted above said.

The issue has been raised by India with the Rajapaksa brothers several times ever since they came to power in 2019.

The 13th  Amendment to the Sri Lankan Constitution became part of local statute as a direct result of the Indian intervention in 1987, under the India-Sri Lanka Accord. It proposes the establishment of a provincial council system and devolution of power for nine provinces in Sri Lanka. However, successive governments in Sri Lanka have not implemented it.

Modi had raised this issue with Gotabaya Rajapaksa as well as with Mahinda Rajapaksa during a virtual summit meeting last year.

Even at the UN Human Rights Council meeting in Geneva in February, India stressed on Sri Lanka implementing the 13th amendment. But it supported Colombo in rejecting a resolution that was aimed at imposing punitive measures on it for the alleged war crimes committed in the decades-long civil war between Sri Lankan security forces and the separatist Liberation Tigers of Tamil Eelam (LTTE).

Gurjit Singh, veteran diplomat and former Indian envoy to Sri Lanka, believes there is “not much resonance left between what we want from Sri Lanka and what they can give us”.

“The Rajapaksas and the Chinese are really thick. They are trying to reduce our leverage. Their behaviour has become quite provocative,” said Singh.  “The Chinese saw that we won back Bangladesh, we won back the Maldives, so they wanted to take away one more friendly neighbour from us and Sri Lanka came easy.”

“As far as the Tamil issue is concerned, it is futile to even think that they will accommodate their cause. The provincial councils are now allowed to languish,” he added.

On the Colombo Port City issue, Singh stressed that the common citizens of Sri Lanka are “not quite content” with the project backed by China.

“They all believe that this is an outcome of some sort of a deal being worked out between the Chinese and the Rajapaksa brothers. This is the reason why there is not much transparency about this new port city,” he said. “They have created an administrative board for the port city but have kept it out of the reach of the Colombo Municipal council.”

He also added that India should now wait and watch as the developments unfold.

“We don’t have deep pockets like our other neighbour. There is a rivalry and we must protect ourselves,” he said. “We need to ensure they don’t threaten our security and use the levers when the opportune time comes.”

– Nayanima Basu is a Senior Associate Editor with ThePrint, where this article was originally featured, and covers diplomacy and strategic affairs. She can be reached at [email protected]

Truth is another front in Putin’s war

Diplomacy quickens to halt Ukraine war or stop its expansion