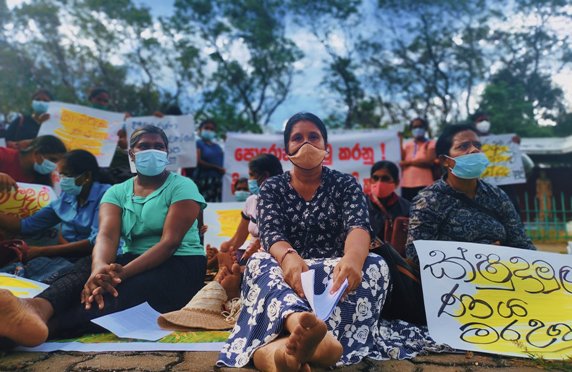 Saumya is a mother of two from Polonnaruwa who has taken a loan of Rs 200,000 from a well-established microfinance company in the region to start a small apparel business to make ends meet. She had already paid over three-fourths of the agreed amount, including the interest. Then recently she was told by the company to pay another Rs 120,000 as a “default amount” before legal action is taken against her. Confused and terrified, with no support from anyone, Saumya narrated her story. Saumya was not the only woman to have fallen victim to predatory microfinance in the country.

Charitha, another victim from Mullativu that I met during my research at the site of the Satyagraha, recalled her own experience. “Before microfinance, we earned a daily wage and ate, if we didn’t have any food, we starved. We did not have big dreams; like everyone else we had certain needs and likes but did not think that we had to take loans to improve our lives. When these people came to the village it was like fairy tale come true but then it spread like a virus!”

In Sri Lanka, the introduction of unregulated microfinance based on neoliberal global and local models mushroomed in the late 2000s to a total clientele today of 2.8 million. Of this, 2.4 million are women. Since its establishment, the microfinance industry has targeted the unbankable populations of rural and urban in the name of promoting financial inclusion. With the end of a civil war, microfinance was also marketed as a panacea for economic development. A decade later, stories of women victims of microfinance highlight that the reality is far from the rosy image portrayed at the introduction of microfinance.

As such, on March 8, 2021, as the world celebrated International Women’s Day, rural Sri Lankan women from Hingurakgoda took to the streets with demands to abolish microfinance debt. The street protest was part of a much larger struggle including satyagraha carried out against the vicious cycle of microfinance debt. At the time of writing, the satyagraha has been carried out for 25 days and the women emphasize that they will continue to do so until their list of demands are met. Their demands include abolishing all microfinance debt, ceasing debt collection until a debt audit is conducted, all legal action against microfinance borrowers be stopped, de-list all microfinance borrowers from Credit Information Bureau and establishing an autonomous and socially emancipatory credit mechanism collectively owned by women.

Coming from low-income vulnerable groups, financial literacy is low among the majority of microfinance clients. This allows women to be easily exploited by predatory microfinance organizations. Women at the satyagraha highlight that most of them do not have copies of agreements that have been compiled in English. The lack of language competence in English further disadvantage women who cannot comprehend what they have signed for. They also emphasize that the nature of the agreements were not explained to them when the agreements were signed. Women are unaware of the interest rate as it is veiled in a weekly or monthly amount. One of the victims at the satyagraha explained how she completes her weekly payment by showing her loan card. She described that she has been paying a weekly amount to the loan collectors. Ironically, while the date and the weekly amount were mentioned, the column displaying the interest paid has not been filled. The woman said that she only knew the total amount that she was asked to pay but not the interest rate. Such exploitative practices have led the microfinance issue to escalate into a rural debt crisis.

While microfinance in scholarly literature is often presented as a magic bullet that empowers women, recent studies have emphasized otherwise. This is because the very notion of promoting entrepreneurship (which is promoted as the activity women finance with their loans) as a solution to rural economic development is highly problematic. Moreover, as is well documented, microfinance creates a vicious cycle of debt and poverty. While microfinance provides financial inclusion, it fails to guarantee economic development due to the extractive neoliberal economic models that it follows. This is conspicuous in countries like Sri Lanka, where right to financial access is futile when the infrastructure for economic development for the rural community is almost non-existent. Moreover, the due to the infrastructural limitations, costs associated with healthcare, transportation and education are much higher in rural areas as opposed to more urban parts of the country. This has deepened during the COVID 19 pandemic, where the financial burden on women has accentuated.

Over the past three years, the workings of the microfinance industry in the island has resulted in over 200 suicides, landlessness, harassment and many forms of violence. Women express that the actions of state institutions marginalize them. Firstly, the difficulty experienced by women when attempting to gain access to state financial systems such as state banks marginalize women. Victims highlight that due to the lengthy process involved and specific requirements including collateral or guarantors make it difficult for women to take financial support. Moreover, in the past year, state institutions including the police and the legal system have also failed to support women. This has resulted in a further marginalization of women where they are not only denied access to state financial services but also to state protection at the local community levels. This creates a condition where women experience multiple forms of structural violence from multiple sources, including both the state and non-state institutions.

The Hingurukoda protest is part of a broader campaign seeking state intervention. For example, over the past three years, the Collective of Women Victims of Microfinance in Sri Lanka has staged street protests, awareness campaigns, and made direct state appeals. Yet so far, successive governments have failed to respond effectively and efficiently to find viable solutions to the issue. The state responses have been limited to a non-mandatory microfinance act that has failed to create a sense of accountability among microfinance institutions and a New Credit Regulatory Authority Act that has not yet been implemented. The state’s non-response denotes that by ignoring women’s demands around microfinance and debt, they are reinforcing a marginalization of their voices. As over-indebtedness is one of the key socio-economic issues of the Sri Lankan rural economy, microfinance debt crisis cannot be solved with haphazard measures. The only way out of the issue is through policy interventions that identify the deeply ingrained structural inequalities that affect the rural women and catering to their socio-economic and political demands.

-This article was originally featured on groundviews.org

With swarms of ships, Beijing tightens its grip on South China Sea