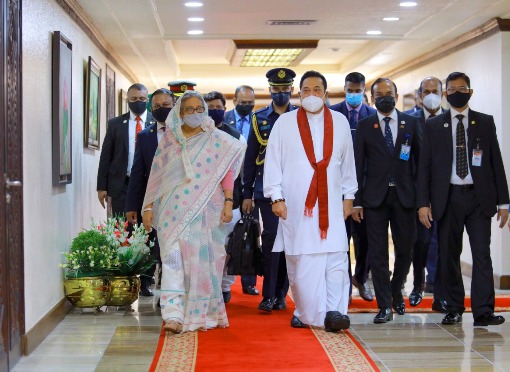 COLOMBO – Sri Lanka and Bangladesh central banks will conduct talks over a swap arrangement, a joint communiqué said after a visit by Prime Minister Mahinda Rajapaksa to the South Asian neighbour.

“Two leaders agreed to request their respective central banks and other financial institutions to cooperate closely in investments, SWAPs and technical issues,” the communiqué said.

Sri Lanka has said it had struck a 10 billion yuan (1.5bn dollars) swap with the Peoples’ Bank of China, which will be drawn down if necessary. Sri Lanka has also asked for US$ 1billion swap from India.

A drawn down swap exposes a soft-pegged central bank to currency risk and capital depletion.

Sri Lanka in February paid back a US$  400 million swap to the Reserve Bank of India, pending a program with the International Monetary Fund (IMF).

State Minister for Money and Capital Markets Nivard Cabraal has said that Bangladesh central bank used to have Sri Lanka sovereign bonds in its portfolio.

He has also suggested that Pakistan and Sri Lanka invest forex reserves in each other’s sovereign bonds, subject to limits.

When Sri Lanka had a currency board under the then ‘Sterling Area’ and there were no balance of payments crises, the Board of Commissioners of Currency invested large volumes of its reserves in Indian and commonwealth debt. Bangladesh did not exist at the time.

In South Asia, the Bangladesh Bank had given the most monetary stability to her citizens after the Maldives Monetary Authority.

All the moneys in South Asia are derived from the Indian rupee, which was around 4.70 to the US dollar at the time of Independence from Britain.

Bhutan and Nepal also has a stable monetary system, but they are pegged the Reserve Bank of India, which several periods of monetary

Bangladesh Bank which prudently provides liquidity to the banking system had maintained monetary stability and credibility for over 10 years. It had  its last currency crisis in 2010/2012 when the currency fell from 68 to 83 and then appreciated amid corrective monetary measures.

The Bangladesh Taka is now 85 to the US dollar hardly changed from 83 in January 2012, keeping an almost East Asian style peg during their highest growth phase and becoming an export power house in the process leveraging on low wages and investible capital.

Bangladesh also has a low revenue to gross domestic product ratio, limiting the ability of rulers to miss-spend money and ensuring that those who earn –and are best qualified to invest in an area which gives them the best return – are free to do so and boost growth.

The IMF has been attempting to push revenues to some arbitrary higher level of revenue to GDP and provide more resources to the hands of bureaucrats and rulers so that they can misspend it.

Growth slowed amid intensified monetary instability as currency crises were triggered by printing money to target an ‘output gap’ (2018 and from August 2019) or raise inflation which was claimed to be too low (2015).