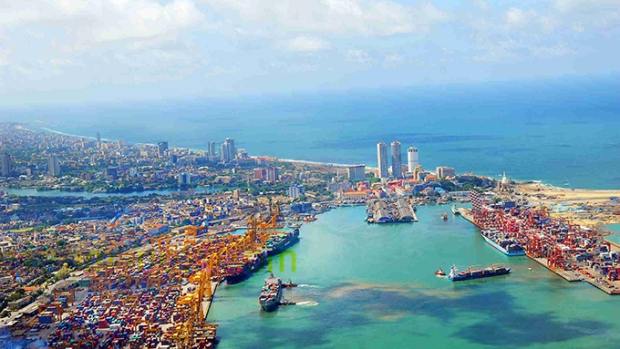 COLOMBO – The Chairman of the Sri Lanka Ports Authority (SLPA), Maj. Gen. (Rtd) Daya Ratnayake has said the Indian company Adani Ports and Special Economic Zones (APSEZ) Ltd., and its partners, including the Sri Lankan company, John Keells, will hold 85% of the stake in the proposed West Container Terminal (WCT) of the Colombo port.

Gen. Ratnayake denied media reports that the APSEZ will hold 51 % of the stakes, though the long statement issued by the company does not mention its stake, leaving one to speculate the company will hold 51% and other private partners will hold the rest of the 85%.

The SLPA will hold 15% in this Public-Private Project (PPP) Gen. Ratnayake said, adding that there is a possibility of Japanese participation as well. However, it is reliably learnt that Japan has not taken any decision on the matter. Like New Delhi, Tokyo was displeased with Colombo’s decision not to have any foreign involvement in the East Container Terminal (ECT) even though a government to government agreement on that terminal had been signed in 2019.

The deal with APSEZ as regards the WCT matches the arrangement with the Chinese-run Colombo International Container Terminal (CICT) in which the Chinese company involved holds 85% of the stakes. In the case of the cancelled deal over the ECT, India (ie: APSEZ) with the Japanese, were to hold only 49%. The SLPA was to own 51%.

Gen. Ratnayake said the WCT will cost about US$ 700 million and that work is expected to begin in about three months’ time.

On March 15, APSEZ announced it has received a Letter of Intent (LOI) from the Ministry of Ports and Shipping and the SLPA, acting on behalf of the Government of Sri Lanka, pursuant to approval from the Sri Lankan Cabinet of Ministers, for the development and operations of WCT in Colombo.

APSEZ is India’s largest private Ports and Logistics company and a key subsidiary of the diversified Adani Group. It will partner with John Keells Holdings PLC, Sri Lanka’s largest diversified conglomerate, and with the SLPA, as part of the consortium awarded this mandate.

The WCT will be developed on a Build, Operate and Transfer (BOT) basis for a period of 35 years as a public-private partnership (PPP). The WCT will have a quay length of 1400 metres, alongside depth of 20 metres, thereby making it a prime transhipment cargo destination to handle Ultra Large Container Carriers (ULCC).

In a statement, the APSEZ said the project is expected to boost WCT’s container handling capacity and further consolidate Sri Lanka’s locational advantage as one of the world’s top strategic nodes along the busiest global transhipment route.

The Colombo Port is already the most preferred regional hub for transhipment of Indian containers and mainline ship operators, with 45% of Colombo’s transhipment volumes either originating from, or destined to, an Adani port terminal in India.

“The network impact of this partnership is significant and expected to mutually benefit from the string of seven container terminals across its 12 ports that Adani operates along the Indian coastline, handling an annual volume of over six million TEUs. This partnership will multiply and accelerate the transhipment options that will become available to serve various shipping lines and other potential port customers across the South Asian waters, benefiting both India and Sri Lanka in multiple ways,” the statement said.

APSEZ CEO and Whole Time Director, Karan Adani, as saying: “Any port partnership is a validation of the mutual trust between two nations and in this context the WCT partnership is significant on several fronts. It is a continuation of the deep and mutually beneficial strategic relationship between two neighbouring nations, whose history is deeply intertwined, and I am grateful to the leaders of the Government of India, leaders of the Government of Sri Lanka and our Sri Lankan partners for the deep trust they have bestowed on us.

“The combination of the strategic location of the Port of Colombo as a launching point for transhipment across the entire subcontinent, the deep domestic strength of SLPA and John Keells Holdings, and the Adani Group’s unmatched network of container terminals across the Indian coastline, opens up several dimensions of growth possibilities for years to come, not just within our two countries but also to the east and the west of our two nations.”

JKH Chairman Krishan Balendra, said: “We are excited about this opportunity to invest in the much-needed capacity expansion of the Colombo Port, and to partner the Adani Group, the leading port operator in India.”

Balendra went on to say that the PPP development of the WCT would bring to bear the synergies, expertise and experience of the Adani Group, the John Keells Group and the Sri Lanka Ports Authority, which would ensure a world class deep-water offering in the Port of Colombo, catering to the largest container ships afloat.

APSEZ, a part of the globally diversified Adani Group, has evolved from a port company to a Ports and Logistics Platform for India. It is the largest port developer and operator in India with 12 strategically located ports and terminals – Mundra, Dahej, Tuna and Hazira in Gujarat, Dhamra in Odisha, Mormugao in Goa, Visakhapatnam, Gangavaram and Krishnapatnam in Andhra Pradesh, Dighi in Maharashtra and Kattupalli and Ennore in Tamil Nadu – represent 24% of the country’s total port capacity, handling large amounts of cargo from both coastal areas and the vast hinterland.

The company is also developing a transhipment port at Vizhinjam, Kerala. Its vision is to be the largest ports and logistics platform in the world in the next decade.

John Keells Holdings is Sri Lanka’s premier diversified, public listed company. From managing hotels and resorts in Sri Lanka and the Maldives to providing port, marine fuel and logistics services to IT solutions, manufacturing of food and beverages to running a chain of supermarkets, tea broking to stock broking, life insurance and banking to real estate, the JKH Group are present in virtually every major sphere of the economy.

Since its modest beginnings as a produce and exchange broker in the early 1870s, JKH, with a rich heritage of over 150 years, now operates in six major sectors of business that have constantly re-invented, re-aligned and repositioned themselves to remain at the forefront through innovation and growth.

JKH are a full member of the World Economic Forum and having issued Global Depository Receipts on the Luxemburg Stock Exchange, were the first Sri Lankan company to be listed overseas. As a Member of the Global Compact – the United Nations-sponsored international corporate citizenship initiative – the JKH Group is committed to sustainable development and social responsibility in a multi-stakeholder context.

The myth of the internationalization of democracy