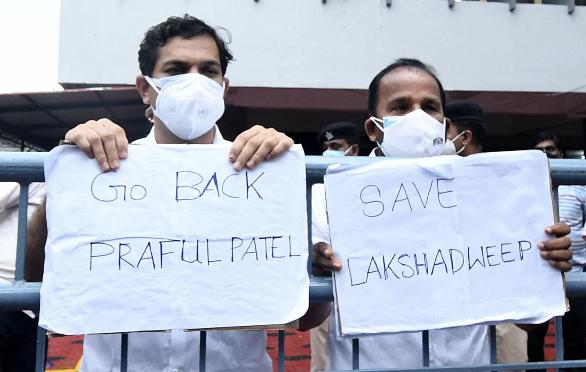 The Administrator of Lakshadweep Islands, Praful Khoda Patel, is tightening his grip on the Muslim-majority archipelago to impose New Delhi’s Hindu nationalism (Hindutva) and its neo-liberal and strategic agendas.

Lakshadweep is an archipelago of 36 islands across 12 atolls. However, only ten of the islands are inhabited. It is a Union Territory with very little autonomy, answerable directly to New Delhi. As per the 2011 Census, Lakshadweep has 64,000 people, 96% of whom are Muslims. The lingua franca is Malayalam, a language which it shares with Kerala on the mainland. The dominant political parties have been the secular Indian National Congress and the Nationalist Congress Party. But Indian Prime Minister Narendra Modi’s Bharatiya Janata Party (BJP) is now trying to extend its influence over the islands using administrative power, despite it’s being a Muslim-majority area.

The appointment of Praful Khoda Patel as Administrator of the Lakshadweep archipelago has been of immense significance. He is the first Laskshadweep Administrator who is a politician and not a member of the Indian Administrative Service. More to the point, he is a member of the ruling BJP, a former Home Minster of Gujarat (Modi’s pocket borough) and a Modi confidante to boot. True to the style of Modi Raj, Patel is vigorously pursuing his chief’s authoritarian and Hindutvic agenda in the guise of ensuring economic development on neo-liberal lines, unfazed by a groundswell of opposition from locals.

Patel has introduced, or has proposed to enact, a slew of radical regulations or bills incurring the wrath of the locals as well as the people of Kerala. Patel also has an unsavoury reputation, and has a complaint of extortion against him with the Mumbai police.

Ban on cow slaughter and beef

The most-noticed of the regulations is an administrative order which seeks to ban the slaughter of cow, calf, bull and buffalo. It also prohibits the sale, transport and storage of beef and beef products. Penalties include a jail term up to one year and a fine of up to INR 500,000. This is so even though the majority of the islanders are beef-eating Muslims.  In contrast, in Kerala, and in the Northeastern states such as Tripura, Nagaland, Mizoram and Meghalaya (which have a large tribal or Christian population) there is no ban on consumption of beef. The plea that beef is a common item of consumption there is used to hide a political exigency to keep the Christian vote.

The second controversial action is the Draft Panchayat Regulation 2021, which, if enacted, will bar people with more than two children from becoming a member of the local government institution, the Grama Panchayat. The plea is that other Indian States like Rajasthan, Telangana, Andhra Pradesh, Gujarat, Maharashtra, Uttarakhand, and Karnataka have also enacted laws disqualifying a person having more than two children from contesting Panchayat elections as part of efforts the keep the population size down.

Be that as it may, the draft regulation is interpreted in Muslim-majority Lakshadweep as a ploy to curb Muslim population growth, which is erroneously believed to be higher than the Hindu rate of growth.

The third regulation is to allow sale of liquor to three resorts replacing the present regulation which allows it on only one island, Bangaram. The effort is purportedly to attract foreign tourists. The liquor policy of the Maldives is cited in defence of the regulation. But the Muslim majority in Laskshadweep sees it as an affront to Islam.

The fourth is the draft Lakshadweep Development Authority Regulation (LDAR) under which government can acquire any land for a public purpose (mainly for tourism and defence establishments). But locals see this as a threat in a situation where land is extremely scarce, the islands being very small.

The fifth are the coast conservation measures. The Administration had removed fishermen settlements on the beach, which the locals consider as unreasonable given the small size of the islands.

The sixth is the draft Lakshadweep Prevention of Anti-Social Activities Regulation which gives powers to detain a person for up to one year to prevent him from “acting in any manner prejudicial to the maintenance of public order”. It allows for detention for anti-social activities from six months to a year without legal representation.

Praful Patel justifies this on the grounds that this will prevent drug peddling and terrorist incursions. District Collector S. Asker Ali is quoted as saying that in March, the Coast Guard had intercepted 300 kg of heroin and five AK 47 rifles and 1,000 live rounds and registered a case. But the Laskshadweep has one of the lowest crime rates in India and there has been no terrorist activity there. Opposition political parties fear that the regulation is basically meant to curb opposition to the government.

The seventh measure is the Administration’s effort to shift Lakshadweep’s communication links from Left-ruled Kerala to BJP-ruled Karnataka. This move, purportedly taken to cut down the distance and travel time, is seen by the people of Lakshadweep and Kerala as an effort to cut the umbilical link between them. The two people speak the same language, Malayalam, and have traded for centuries.  The Left and the Congress feel that the BJP is wanting to insulate the people of Laskshadweep from the secular politics of Kerala and create links with Karnataka which is a Hindutva-oriented State.

Last but not the least, there is a strategic dimension lurking behind all the moves of the Administrator acting at the behest of New Delhi. The Lakshadweep Islands is strategically located in the Arabian Sea close to the Indian Ocean. India would not only like to develop them as a tourist attraction as good as the Maldives, but also as a naval base to check Chinese influence on India’s Western seaboard.

India has major naval and air stations in the Andaman Islands off the eastern coast off the Bay of Bengal, but it has only one small outpost INS Dweeprksha in Kavaratti island in Lakshdweep. The importance of having a reasonable presence here was highlighted by the recent intrusion of an American naval vessel on April 7.

An unapologetic US Embassy press release stated that the guided missile destroyer, USS John Paul Jones, had “asserted navigational rights and freedoms approximately 130 nautical miles west of the Lakshadweep Islands, inside India’s exclusive economic zone [EEZ], without requesting India’s prior consent, consistent with international law”. India feebly protested against this cheeky assertion by the US which is said to be an ally in the anti-China grouping ‘Quad’.

However, New Delhi has awakened to the possibility of such intrusions by friend and foe alike. India might acquire a base in Addu in the Maldives where it is going to set up a Consulate. It had plans to set up a base in the Seychelles also but that ran into trouble with the government there.

New Delhi could therefore be looking at the Lakshadweep as a base in the Indian Ocean. And Praful Patel may well be preparing the ground for its execution by bringing about laws to control the local Muslim population.