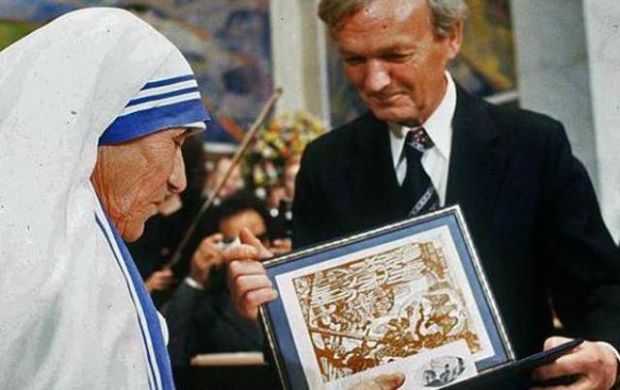 Mary Teresa Bojaxhiu (August 1910 –September 1997), better known as Mother Teresa, was an Indian-Albanian Catholic nun who, in 1950, founded the Missionaries of Charity. Born in Skopje—at the time, part of the Ottoman Empire, she moved to Ireland at age 18 and then to India, where she lived most of her life. Saint Teresa of Calcutta was canonized on September 4, 2016. The anniversary of her death is her feast day.

After Mother Teresa founded her religious congregation, it grew to have over 4,500 nuns and was active in 133 countries as of 2012. The congregation manages homes for people who are dying of HIV/AIDS, leprosy, and tuberculosis. The congregation also runs soup kitchens, dispensaries, mobile clinics, children’s and family counselling programs, as well as orphanages and schools. Members take vows of chastity, poverty, and obedience and also profess a fourth vow: to give “wholehearted free service to the poorest of the poor”.

Photo Caption – Mother Teresa being awarded the Nobel Peace Prize in 1979 “for work undertaken in the struggle to overcome poverty and distress, which also constitutes a threat to peace” –Pinterest

US Justice Dept. recommends Bannon be sentenced to 6 months in prison