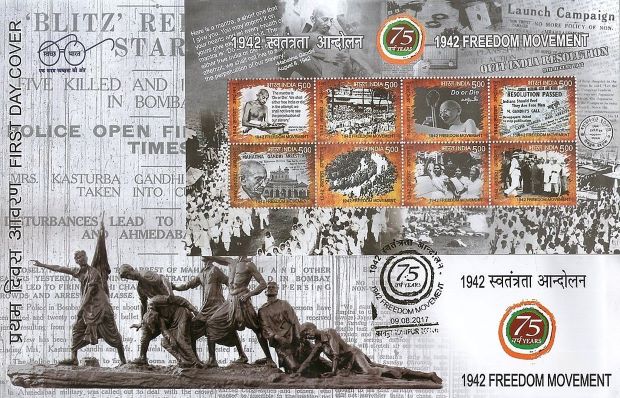 After the failure of the Cripps Mission to secure Indian support for the British war effort, Mahatma Gandhi made a call to Do or Die in his Quit India speech delivered at the Gowalia Tank Maidan in Bombay on this day in 1942, after which the All India Congress Committee launched a mass protest demanding what Gandhi called “An Orderly British Withdrawal” from India. Even though it was at war, the British were prepared to act. Almost the entire leadership of the Indian National Congress was imprisoned without trial within hours of Gandhi’s speech. Most spent the rest of the war in prison and out of contact with the masses.

The British had the support of the Viceroy’s Council (which had a majority of Indians), the All India Muslim League, the Hindu Mahasabha, the princely states, the Indian Imperial Police, the British Indian Army, and the Indian Civil Service. Many Indian businessmen profiting from heavy wartime spending did not support the Quit India Movement. Many students paid more attention to Subhas Chandra Bose, who was in exile and supporting the Axis Powers. The only outside support came from the Americans, as President Franklin D. Roosevelt pressured Prime Minister Winston Churchill to give in to some of the Indian demands. The Quit India campaign was effectively crushed. The British refused to grant immediate independence, saying it could happen only after the war had ended.

Sporadic small-scale violence took place around the country and the British arrested tens of thousands of leaders, keeping them imprisoned until 1945. In terms of immediate objectives, Quit India failed because of heavy-handed suppression, weak coordination and the lack of a clear-cut program of action. However, the British government realized that India was ungovernable in the long run and the question for the post-war era became how to exit gracefully and peacefully.

In 1992, the Reserve Bank of India issued a 1 rupee commemorative coin to mark the Golden Jubilee of the Quit India Movement.

Killings of 4 men in Albuquerque leave Muslim community in fear