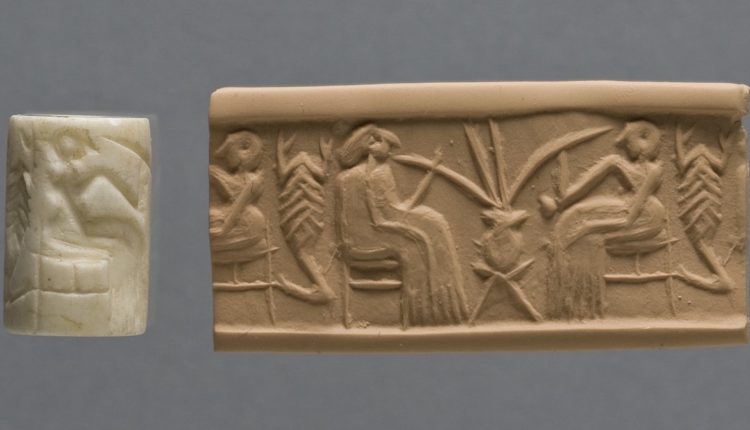 The ancient Mesopotamians really didn’t mind a beer, new chemical analysis has shown.
Many Bronze Age textual and pictorial sources attest to the consumption of beer in Mesopotamia – the oft-described “cradle of civilization” between the Tigris and Euphrates Rivers in the Middle East – from as early as 4000 BCE.
References deciphered from third millennium BCE cuneiform texts show that the Mesopotamians were as sophisticated in their tastes as today’s hipster craft-brew fans, choosing between several different types, including golden beer, sweet dark beer and red beer.
Unambiguous chemical and archaeological evidence, however, has remained scarce. The identification of building remains as breweries, large vats as beer-making pots, and bowls as drinking vessels have been based mostly – say a team of archaeologists led by Elsa Perruchini from the University of Glasgow in Scotland – on “educated guesswork.”
In a paper published in the ‘Journal of Archaeological Science,’ Perruchini and her colleagues present the results of organic residue analyses performed on a variety of objects recovered from a site called Khani Masi, located along the upper reaches of the Sirwan/Diyala River in what is today the autonomous Kurdish region of Iraq. The site dates to between 1500 and 1000 BCE.
The findings not only confirm many of the tentative text-based identifications of breweries and brewing equipment, but also extend considerably the range of vessels used to quaff the results – supplying, in the process, an insight into how drinking culture changed over the centuries.
Just as importantly, the analysis shows definitively that the Mesopotamians used barley as the central ingredient of their beers. While not entirely unexpected, the confirmation was welcome.
After all, brewing has emerged more than once in ancient history, revealing that there is more than one way to make a decent drop. The Chinese, for instance, used rice, and the Peruvians used corn. The ancient Egyptians, like the Mesopotamians, preferred barley – as, indeed, do most modern-day brewers.
This last fact was particularly fortuitous for Perruchini and her colleagues, because they were able to use samples of modern beers as controls. Every chemical detected in the archaeological artefacts – such as benzoic, butanedioic, pimelic, suberic or azelaic acids, for example – that was also found in the modern beers sharpened the possibility that the scientists were detecting the molecular echoes of an ancient brew.
Mass spectroscopy, for instance, detected a triterpene called squalene. By itself, it could have come from human skin, but its presence with many other beer-related chemicals increased the likelihood that it derived from another common source: germinated barley grains.
The scientists’ painstaking analyses confirmed that several vats and large vessels were indeed used for the brewing and drinking of beer, in line with textual and pictorial sources. However, they also discovered that the good folk of Khani Masi were much more flexible – or a lot less fussy – when it came to beer-drinking habits than previously thought.
There is plenty of evidence to suggest that for the Mesopotamians drinking was a communal affair.
“Most studies of ancient Mesopotamian beer have associated its consumption with medium to large jars, from which the beverage was collectively sipped using long straws, sometimes with metal filters attached to the top,” the researchers note.
There is considerable iconographic and archaeological evidence to suggest that the Mesopotamians owned hand-held drinking vessels, ranging from small cups capable of holding between 100 and 200 millilitres (about the volume of a glass of wine) and larger “Kassite” goblets, which held about 600 millilitres.
The standard assumption was that these smaller vessels were used for drinking wine – an individual rather than shared practice.
Analyses by Perruchini and colleagues contradict that conventional position. Results suggest that they too were used to drink beer.
This, they say, indicates a change in cultural practice.
“In social terms the association of both small to very small drinking cups and the medium-sized solid-footed goblets with beer suggests a shift from late third and early second millennium BCE collective beer drinking experiences to more individualised ones,” they write.
It’s a change that invites further investigation, not merely because of the move away from sucking beer out of a barrel through a straw, but also for geo-political reasons. The Khani Masi region sat at the edge of the Mesopotamian influence, next to the Upper Diyala River valley – an area as yet little understood in Bronze Age terms.
In this context it is possible that beer three-and-half-thousand years ago – as now, sometimes – also functioned as a kind of diplomatic ice-breaker.
“This points to the selective and no doubt socially strategic local adoption of Babylonian drinking paraphernalia and practices into an otherwise distinct west Iranian cultural sphere,” the researchers conclude.

A clay tablet from Iraq, around 2500 BCE, showing people drinking beer from a single vessel, using straws –Oriental Institute of the University of Chicago

A Swastika on a church bell rings of its Nazi past

‘Nomadland’ makes history and Chadwick Boseman is upset at the Oscars

Looted objects from Afghanistan are returned