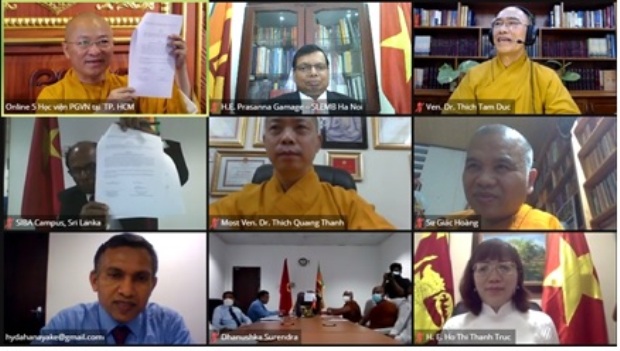 The MoU, an initiative of the Embassy of Sri Lanka in Vietnam, signed in a virtual ceremony on Saturday (19), facilitates the exchange of scholars and students, conduct of annual Buddhist conferences, and further consolidate relations between the Buddhist Sangha of Vietnam and the Sangha of the Four Nikayas of Sri Lanka.

According to a statement from the Sri Lankan embassy in Hanoi, the key element of the MoU is an annual Buddhist Conference to be held alternatively in Vietnam and Sri Lanka by the two institutions.

Thich Tri Quang, the First Deputy Patriarch of Vietnam Buddhist Sangha and Rector of the Vietnam Buddhist University in Ho Chi Minh City delivering his opening remarks during the virtual signing ceremony welcomed the initiative taken by the two Universities and expressed firm belief that both institutions would be able to achieve positive outcomes through the MoU, the statement said, adding that Quang had said the existing cordial partnership, goodwill, clear goals and strong commitment to collaborate would help the two countries in further nourishing Buddhism and culture.

He had also expressed confidence that the signing of the MoU would not only strengthen the friendly relationship between the universities but also promote existing collaboration between Vietnam and Sri Lanka in different aspects.

Dr. Upali Sedera, Rector of SIBA, in his opening remarks said the MoU and the activities outlined therein would be an important first step towards broader cooperation between the two countries, the statement noted, adding that he had also emphasized SIBA, with its resources and experience, would be able to fulfil the tasks ahead, while fondly recalling his previous visits to VBU in 2018 and 2019, and his participation at the UN International Vesak Day in 2019 in Vietnam.

Most Ven. Dr. Thich Nhat Tu, Standing Vice-Rector of VBU recalled his visit to the SIBA to attend its inauguration ceremony, the statement said, adding that Ven. Dr. Tu had appreciated the remarkable academic excellence achieved by SIBA during a short span of time, and its contribution in educating and training Vietnam Buddhist Monks over the years.

Currently, 15 Vietnamese monks are following degree programs at SIBA. Ven. Dr. Tu had also conveyed his confidence that once the COVID-19 pandemic is eradicated, the two institutions will be able to implement work programs under the MoU effectively.

Prasanna Gamage, Ambassador of Sri Lanka to Vietnam, and Madam Ho Thi Thanh Truc, Ambassador of Vietnam to Sri Lanka, reaffirmed the commitment of both countries to the enhancement of bilateral relations and recognized the historic Buddhist religious and cultural connectivity between the two countries. Both envoys also pledged their unwavering support to the implementation of the activities envisaged in the MoU in the future.

Assistant Professor Sarath Chandrasekara of SIBA moderated the virtual signing ceremony and delivered the concluding remarks, expressing his appreciation of the initiative, the statement said.

US commits US$ 150 million to support small businesses, empower women