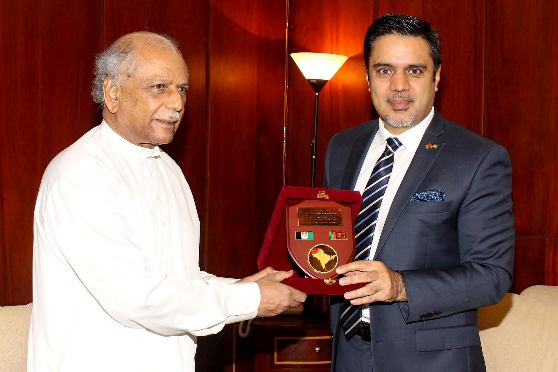 COLOMBO – Sri Lanka and Afghanistan have agreed to commence Foreign Office Political Consultations in a move that would see the continuation of the current momentum of bilateral engagement with strong commitment for enhanced relations.

The agreement was reached when the Sri Lanka Minister of Foreign Affairs, Dinesh Gunawardena, met with the Afghanistan Ambassador in Sri Lanka, Ashraf Haidari, on Friday (19).

The two parties agreed to commence the Foreign Office Political Consultations by concluding the proposed Memorandum of Understanding next month, which the Cabinet of Ministers in Sri Lanka already endorsed.

A statement from the Ministry of Foreign Affairs said there was consensus that expeditious action would be taken in respect of the other bilateral instruments, which include an Agreement on Transfer of Sentenced Persons, an Air Services Agreement and two MoUs respectively on Diplomatic Visa Waiver and Defence Cooperation.

Both parties, the statement said,  shared the sentiment that being close neighbours, as well as Members of the SAARC, the future potential in trade and economic cooperation must be explored through the relevant trade chambers in the two countries. Haidari has also invited Sri Lanka to explore the high potential areas for bilateral trade, including tea, gem and jewellery, dry fruits, nuts and cereals, while proposing to establish direct aviation connectivity between the two countries.

He had also provided a briefing to Gunawardena on the ongoing peace process in Afghanistan and conveyed his country’s aspirations for a successful outcome. While wishing Afghanistan to achieve durable peace and security, Foreign Minister Gunawardena unequivocally condemned the recent acts of terrorism in Kabul, which resulted in several civilians deaths.

Ambassador Haidari had also invited Minister Gunawardena to undertake an official visit to Afghanistan, including to the regions of Buddhist heritage, such as Bamiyan.

In the shadow of Nollywood, filmmakers examine Boko Haram