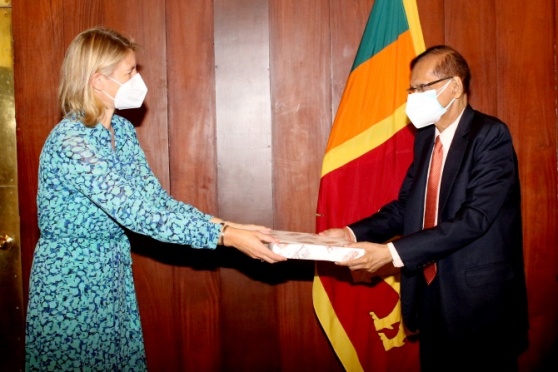 COLOMBO – Minister Prof. G.L. Peiris highlighted the long and fruitful relationship between Sri Lanka and the Netherlands, which has influenced the legal system, architecture, cuisine, culture and lifestyle, as well as various facets of the socio-political system in the country when the Ambassador of the Netherlands to Sri Lanka Tanja Gonggrijp paid a courtesy call on Wednesday (25).

Peiris also made specific reference to the legacy of Roman-Dutch law, which has contributed to the evolution of the Sri Lankan legal system.

With regard to contemporary relations, the Foreign Minister reiterated the strong resolve of the Government of Sri Lanka to reinforce areas of co-operation with the Netherlands in the political, economic and cultural spheres, enhance connectivity and people-to-people interactions, as well as to further strengthen collaboration in multilateral fora, a statement from the Foreign Ministry said.

It said, the Dutch envoy reciprocating the sentiments of the Foreign Minister, elaborated on the many areas of synergy and cooperation existing between Sri Lanka and the Netherlands which are harnessed for mutual benefit, and referred to Dutch technical expertise in the fields of agriculture, dairy industry, culture, heritage management and restoration, which are being utilized in programs of the ongoing collaboration with Sri Lanka.

Gonggrijp, the statement said, also referred to value-added production and exports in the agriculture sector, capacity building in the dairy sector, and use of organic fertilizer and sustainable agriculture in Sri Lanka, as areas where there can be further collaboration with the Netherlands.  There was an agreement to further explore areas of synergy for mutual benefit, it added.

WHO says global Covid cases remain high, but levelling off