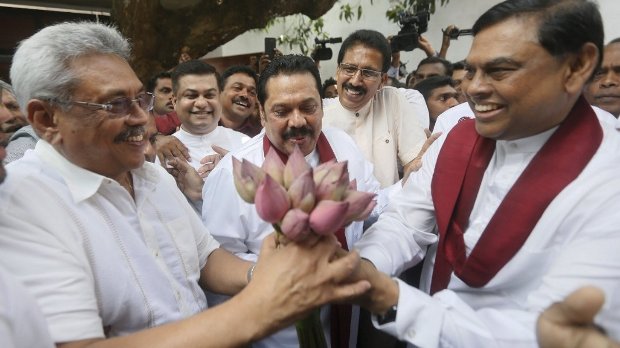 COLOMBO – Given the intense speculation that incumbent President Gotabaya Rajapaksa will be replaced by his brother Basil Rajapaksa as the Sri Lanka Podujana Peramuna (SLPP) candidate in the 2024 Presidential election, Gotabaya’s announcement on Monday (19) that he intends to seek a second term came as a surprise to many.

He had earlier said he would be president only for one term, and given his reputation, people believed him. But his inability to fulfil his promises (principally to put Sri Lanka on the path of sustained and sustainable economic development) had made him rethink his resolution to stick to one term. The COVID-19 pandemic and other issues had stymied his attempts. On Monday, he told the media that he has time beyond 2024 to fulfil his goals, thereby saying he is looking for a second term.

In the weeks preceding Gotabaya’s statement, the expectation was that Basil Rajapaksa, the behind-the-scene economic and political manager of the SLPP and the government, would return from the US, set the house in order, get the economy going, and be set up as the SLPP’s 2024 Presidential candidate. But resistance from Gotabaya to this plan was intense as he needed a free hand to carry out his agenda as per his wishes.

According to sources, there were intense, and at times, acrimonious discussions within the Rajapaksa clan. But finally, a compromise formula was worked out in the best interest of the family and the SLPP, which is but a Rajapaksa family creation. The compromise appears to be that Gotabaya will seek a second term and Basil will help him win again, thus maintaining family unity as well as national power in the hands of the Rajapaksas.

At present, all key executive positions in the government, including the presidency, the premiership and the finance ministry are in the hands of the Rajapaksa siblings. For decades, the family had gained immensely by being united, and it was unlikely that this solidarity would be destroyed when the family’s hold was being seriously questioned due to non-performance in the last two and a half years under the Gotabaya Presidency. It was time members of the family put their shoulders to the wheel to save the regime and win the provincial elections in 2022 and the 2024 presidential poll.

Basil had single-handedly created the SLPP after his elder brother, Mahinda Rajapaksa, quit the Sri Lanka Freedom Party (SLFP) and struck out on his own. He led the party to a decisive victory in the local bodies elections against the then ruling United National Party – SLFP combine. He was instrumental in getting Gotabaya elected as President in 2019 and the SLPP getting a two-thirds majority in the 2020 parliamentary elections. When COVID-19 struck, he successfully managed the social and economic side of the dire situation created by the pandemic, wining kudos from international organizations.

But over time, power shifted from Basil’s hands and went straight into the hands of the military, with the backing of President Gotabaya, himself a former army officer. The military’s involvement in civil administration had kept increasing by the day much to the dismay of the Rajapaksa family, wedded as they were to the supremacy of civilians over the military. Basil Rajapaksa left for the US (as he is a dual citizen) and did not come back till the political and economic situation in Sri Lanka was ripe for his return. The time came when the Gotabaya regime was losing ground rapidly.

Initially welcomed by the majority of Sri Lankans on the expectation that Gotabaya will restore orderly government and push the country back onto the economic developmental path, he did not live up to expectations. Pandemic-triggered disruption of economic activities (lockdowns and movement restrictions) inconsistent actions, frequent changes in policy and decisions, lack of consultations with stakeholders including party people in touch with the grassroots, and rising prices of essentials, made people wonder if the SLPP will win the next elections.

There was a call for the return of Basil from America to set the house in order before facing the next polls. As one insider said: “Basil is our last hope.”

But Basil apparently wanted the Ministries of Finance and Economic Development and also the foreign investment department. Sri Lanka had lurched towards China, thus alienating India and the West. This put investment prospects in the China-funded and executed US$ 1.4 billion Colombo Port City in jeopardy. Basil, known for his broadminded and pragmatic approach could secure the co-operation of India, the West, and China at the same time, it was felt. The world sees both Gotabaya and Mahinda as doctrinaires.

Eventually, Basil got the finance and economic development portfolios after a hard-fought battle, because these were in the grip of the president aided and advised by his influential Secretary Dr. P. B. Jayasundara. As part of the compromise, it appears Basil will continue with some of the pet projects of the President but handle the rest of the economy independently. He has already met the envoys of the Western countries, India and China. The West is now opening up to Sri Lanka with the announcement of some investments and vaccine supplies. India is looking for openings and China is keen on Sri Lanka’s continuing to encourage Chinese investments. Basil’s aim, like President Gotabaya’s, will be to secure FDIs and not loans,  the latter having cast a very heavy burden on Sri Lanka,  driving it towards the International Monetary Fund (IMF).

Both Basil and Gotabaya have promised to open the Sri Lankan economy by September after widespread vaccination with the help of Chinese, Western, Russian and Japanese inputs.

Ignored for 30 years, IPKF heroes finally get their due under Modi government

Boris Johnson finds himself in a quandary over racism and sports