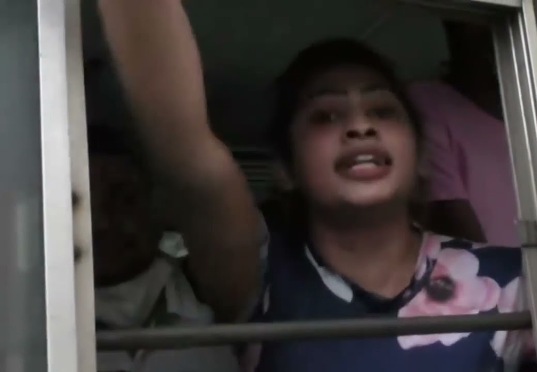 COLOMBO – For two weeks an inferno blazed on the X-Press Pearl, a container ship, off Sri Lanka’s western coast. Its cargo—everything from frozen fish to hazardous chemicals and tiny plastic pellets known as nurdles—burned up or spilled into the ocean. Eventually, on June 2, the ship sank. Nurdles and other debris are washing up on beaches. Hard questions have been asked about why the vessel, which was known to have a leaky container of acid, was allowed to enter Sri Lankan waters.

So naturally, all that many Sri Lankans have discussed for the past week is Piumi Hansamali, a 28-year-old model and actress.

On the same day that the ship sank, police in the capital, Colombo, bundled Hansamali and more than a dozen other people into an old bus and drove them to Passara, a distant village, for a compulsory two-week quarantine. Hansamali had earlier been arrested and released on bail for attending a birthday party on May 30 for Chandimal Jayasinghe, a beautician and beauty pageant impresario, in a five-star hotel, in violation of a lockdown that started in the middle of May.

Hansamali, an accomplished social-media influencer with over 400,000 followers on Facebook and another 1.6m followers on Instagram, shot back with an angry, finger-pointing Facebook Live broadcast from the bus. Wiping sweat off her brow, she heaped wrath on a television journalist who had urged police to punish the revellers (he later complained to police of death threats).

The online rant was viewed over 34,000 times and set off a social-media firestorm about class, influence and privilege. When allegations later emerged that Sarath Weerasekera, the public-security minister, had ordered the bus to turn round so that its occupants could pick up clothes, the maritime disaster was all but forgotten. On June 5 a local news website wryly noted that searches on Google for Hansamali and Jayasinghe far exceeded those for the sunken ship. Hansamali, for her part, made the best of a bad situation and took to posting pictures on Instagram of her quarantine digs
.
The episode reflects a deeper unhappiness with the government’s enforcement of lockdown rules. For days before the bus incident, police had cracked down on violators, in some cases physically carrying them off the streets. But the partygoers were detained only after pressure from the media. Nor was the hotel punished for allowing the bash. Three recent deaths in custody—including one on June 6, in which a man seeking food for his family was detained for breaching travel restrictions and died after falling from a police vehicle—have sharpened the sense of double standards.

Weerasekera addressed Parliament two days later, to defend himself against allegations that he gave Hansamali special treatment after she called him.

Yet the embarrassment for the government is minor compared with the political headache the sunken ship is threatening to become. Dead turtles and dolphins have started washing ashore, fishing is disrupted and hundreds of soldiers are still scooping nurdles from the coastline. Fears abound of leaks from the vessel’s fuel tanks. A criminal investigation is underway. Five expert groups are assessing the damage with a view to securing maximum compensation from the ship’s owners.

But gone is any public interest in the fire-fighting capacity of the port of Colombo or whether chumminess between local shipping agents and officials played a part in the vessel being waved through.  Hansamali and her friends may have meant to cause the government grief. In reality, they did the opposite.