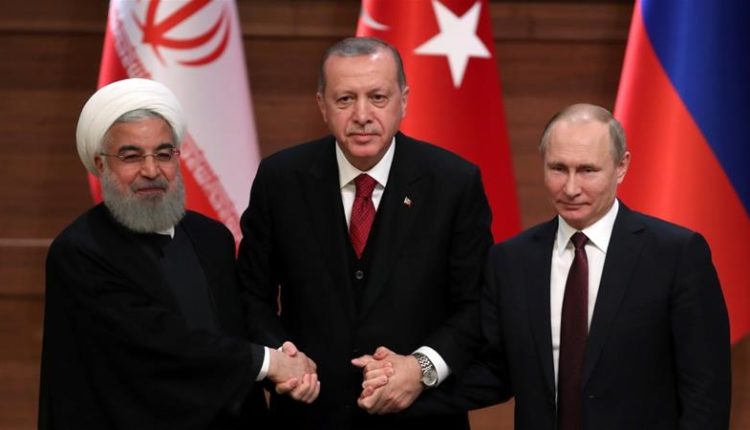 The fate of the last remaining stronghold of the Syrian opposition in Idlib will likely be decided in the coming few days. The international media has been speculating about an imminent battle for the province, which has been the focus of hectic diplomatic activity.

On September 7, the leaders of Turkey, Russia and Iran will meet and decide the future of Idlib and with it the fate of Syria’s seven-year conflict.

Idlib is the last unconquered de-escalation zone of the four that were agreed to by the Astana trio (Russia, Iran and Turkey) following the fall of the opposition-held eastern Aleppo in December 2016. The idea of de-escalation was designed – or at least that was the general perception at the time – to freeze the conflict, decrease human suffering, and pave the way for a political solution.

That proved to be a mere illusion. Lacking adequate manpower to fight at different fronts, the Russians threw their weight behind the de-esclation zones idea, originally proposed by the UN special envoy to Syria Staffan de Mistura in 2014.

In addition, following the defeat of the Islamic State of Iraq and the Levant (ISIL, known as ISIS) in Mosul, the Russians started to realize that while they were busy fighting the opposition along the western belt of Syrian territories between Aleppo and Damascus, the US-backed Syria Democratic Forces (SDF) was quickly retrieving ISIL territories in the oil and gas-rich east.

For that reason, Moscow decided to freeze the conflict with the Syrian opposition and entered into a race with the US-led coalition to regain as much territory from retreating ISIL as possible. The Euphrates River acted as a natural borderline between the Russian and the American spheres of influence.

As the war with ISIL was approaching its end, Russia reverted back to its strategy of crushing the armed opposition before any political solution can be negotiated. It attacked and took over the de-escalation zone in Eastern Ghouta, near the capital, Damascus.

Russia and regime forces then moved onto the province of Homs in the north before going after Daraa and Quneitra in the southwest, near the borders with the Israeli-occupied Golan Heights.

Hundreds of thousands of opposition fighters have been relocated to the northwest under evacuation agreements. Idlib was turned into a gathering place for all opposition factions, along with some two million refugees, preparing for a final showdown.

Shortly after the armed opposition groups were forced to evacuate from the southwest, Syrian President Bashar al-Assad indicated that Idlib would be his next target.

The Syrian army started to amass troops and drop leaflets over the province, urging people to return to “state rule” and demanding the surrender of the armed factions. However, Idlib looks like a much more complicated case to deal with in political, military and humanitarian terms than the other three de-escalation zones.

With an area of 6,000 sq km, Idlib houses around three million people. The UN has warned that an offensive in the area could force 2.5 million of them towards the Turkish border and precipitate a massive humanitarian crisis.

Idlib is also home to more than 60,000 well-armed opposition fighters. The presence of the al-Qaeda-affiliated Hay’et Tahrir al-Sham (HTS) further complicates the situation. With more than 12,000 fighters, HTS controls a great part of Idlib and has vowed to fight to the end.

Russia, Iran and the Syrian regime use this as a pretext to attack, citing UNSC resolutions, which have designated HTC a terror group. With nowhere else to go, it is expected that, in the eventuality of war, these opposition groups will put a very stiff resistance.

In addition, Turkey has troops at 12 observation posts in the Idlib Province to monitor the Astana truce. Without prior agreement, any Russian-backed offensive could well lead to greater tension between the three.

Turkey has already warned that an attack on Idlib could put the last nail in the coffin of the Astana process. Right now, Turkey and Russia are engaged in extensive diplomatic talks to prevent this from happening.

Turkey and Russia have both announced that the leaders of the two countries will hold a bilateral meeting on the sidelines of the Tehran summit to discuss the future of Idlib. Three scenarios can be discussed here.

The first one is that Turkey and Russia would agree to uphold the de-escalation zone in Idlib, providing that Turkey deal with the HTS problem. Over the past several months, Turkey has been trying to persuade the HTS to dissolve itself and melt within the Turkey-backed Free Syrian Army factions.

The HTS foreign fighters have been offered a safe exit to relocate somewhere else. These efforts have not yielded the desired results, however. Last week, as a sign of frustration, Turkey listed the HTS as a terror group, signalling a possible military action against it.

If Turkey agrees to take action against the HTS, this could avert a Russian attack on Idlib until a lasting peace is achieved in Syria.

If Turkey fails to deal with the HTS, the second scenario becomes very probable. It would allow for a limited Russian-led military action in Idlib to take out the HTS and other “radical” groups. Given the high population density in the area, Russia and even the Syrian regime seem to be trying to avoid a massive military attack – something that Iranwould like to undertake.

At this stage, Russia seems to be mainly seeking to secure its Hmeimim airbase in Latakia from drone attacks by pushing the opposition factions in Idlib further north. The Syrian regime, on the other hand, seems to be mainly interested in regaining control of the M5 highway, the country’s main trade road, which passes through parts of Idlib.

For the past two years, the regime’s offensive strategy has traced the M5’s 470km from Aleppo in the north to Hama, Homs, Damascus and more recently Daraa in the south. The only remaining part of the M5 outside regime control lies now in parts of Idlib.

Indeed, the regime would want to regain every inch of Idlib but simply does not have the manpower to do so, especially against tens of thousands of die-hard opposition elements, with nowhere else to go.

The third and the most feared scenario is an all-out offensive in Idlib. This scenario is unlikely at this stage because it is very costly both politically and militarily. It would also lead to a humanitarian disaster, a massive refugee crisis and destruction at a large scale. It would destroy the evolving partnership between Russia and Turkey and lead to the collapse of the Astana process.

It will put more pressure on the already strained Russian-European relations as it would lead to a new wave of refugees. The US has also warned against a massive attack in Idlib and stated that it would intervene in case chemical weapons are used.

Lastly, an all-out attack in Idlib runs counter to the new Russian strategy, aiming at returning the Syrian refugees back home and starting the reconstruction process with aid from Europe and the Gulf states.

The Tehran summit will, however, show which of these three scenarios will prevail and whether the future of Idlib will be decided by war or by diplomacy.

There is, in fact, some room for cautious optimism here but that is mainly because of war fatigue, not because we have some great diplomats handling the Syrian conflict.

Marwan Kabalan is the Director of Policy Analysis at the Arab Centre for Research and Policy Studies. This article originally appeared on aljazeera.com